Beyoglu next to Taksim Square is a part of the heart of Istanbul, it's a great way to get away from the old city and enjoy modern Istanbul as the locals do. There is so much going on in the approximately 2,5 kilometers long street between the Tunnel funicular stop near Galata Tower and Taksim Square that you can spend a whole day here. You can find a brief of Istanbul in every corner, there is a hidden story of the city everywhere. Religions, languages and ethnic groups live brotherly around these premises, it's the center of art and culture, many national, international and local activities reach art lovers through the neighborhood. 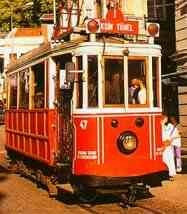 Beyoglu is a residential area consisting of 45 neighborhoods and about 245,000 residents, but the daily population reaches up to a million being the center of commerce, entertainment and culture. It's one of the most important tourist points and one of the most famous avenues of the city, the distinguished brands of business and entertainment world serves in this area as well. Many exquisite boutiques, music and bookstores, libraries, art galleries, cinemas, theaters, cafes, bars, restaurants, pubs, coffee houses, patisseries, chocolateries, and technological centers are lined on Istiklal Street.

Beyoglu has a large number of foreigners of all nationalities living in this neighborhood. The area is also home to significant Turkish Christian and Jewish communities, there are several churches and synagogues.

The Galatasaray Square is almost at the halfway of the Avenue and houses one of the finest educational institutions established in Turkey during the Ottoman Empire; formerly Mekteb-i Sultani (School of Sultans), today Galatasaray Lisesi (high school).

Across Galatasaray Square there are some significant historic buildings such as the Cicek Pasaji (The Flower Courtyard) with many small restaurants and taverns, and Balik Pazari (Fish Market) where you can find some fresh fish and vegetables.

On the same street and on its side streets there are also Catholic churches such as Saint Antony of Padua and Santa Maria, Armenian Churches, Synagogues, old mosques, Pera Palace Hotel built in 1892 by George Nagelmackers, academic and cultural institutions established by various European nations such as Germany, Italy, Austria, and France in the early 19th century, consulates of several nations including Germany, France, Greece, Sweden, Armenia, Russia, Netherlands, Spain, Sweden, and United Kingdom, amongst which the British and German consulates being the most impressive buildings in the area.

To the end of this pedestrian street towards Galata, there is Tunnel, the world's second-oldest subway, connecting Pera district with Karakoy district on the Golden Horn. Next to this you can also see Divan Literature Museum which is called as Galata Mevlevihane belonging to Mevlevi order founded by Mevlana, where Whirling Dervish ceremonies are performed.

Old Galata and Pera districts were inhabited since the Byzantine Empire. During the 19th century Ottoman Empire, the street was known as Grande Rue de Pera and the district became a center for foreigners, Levantines, Ottoman intellectuals and western culture admirers. After 1923 the street's name was changed to Istiklal (Independence in Turkish) to commemorate the War of Independence.

In June 2013 and during the months following that, many anti-government protests took place in Taksim and Beyoglu area. The clashes between the protesters and the law enforcement agents lasted for several weeks after the occupation of Gezi Park in the Square, where it was planned to build a shopping mall, thus worrying the environmentalists and taking action against the plan.