The ancient Byzantine church, built by emperor Justinian I between 532-537 AD after the Nika Riot, was later converted to a mosque with the addition of minarets in mid-15th century. It was used as a museum during the Republic era until July 2020, then it's re-converted to mosque. The remarkable structure with its 56 meters high immense dome is a mosque today that can be visited by tourists off the prayer times, in which you can see both Christian and Islamic art. There are good examples of the Byzantine mosaics as well. For about 1000 years this was the largest church in the world, and glory of the Byzantine Empire.

Blue Mosque is a name given by tourist; its real name is Sultanahmet Mosque. This 17th century mosque, facing the Haghia Sophia, is famous for its beautiful blue tile work ornamenting its interior walls. Its surrounding six slim minarets distinguish it from other mosques which normally have two or four minarets. The mosque was built in seven years between 1609-1616 by the architect Mehmet Aga with the order of Sultan Ahmed I and became the most important mosque of the city, right in the Sultanahmet square.

This outstanding piece of architecture was built 1550-1557 by the famous Ottoman architect Mimar Sinan by the order of Sultan Süleyman the Magnificient. It's dedicated to the sultan, hence called Suleymaniye Mosque. Standing on a hilltop of the ancient city over the Golden Horn, it contributes gracefully to the city's skyline. The tombs of the Sultan, his wife Hürrem and Mimar Sinan are found within its compounds. It is the largest mosque of Istanbul with four distinguished minarets.

The Suleymaniye mosque was lately restored and re-opened to public in November 2010.

The first mosque built after the conquest of Istanbul, the great Mosque of Eyup lies outside of the ancient city walls in Eyüp district, near the Golden Horn, at the supposed place where Eyüp (Eyyub el Ensari), the standard bearer of the Prophet Muhammed, died in the Islamic assault on Constantinople (Istanbul) in 670. Today it's considered as the second place of pilgrimage for Muslims after, of course, Mecca.

Built over the ruins of the Church of Apostles, Fatih Mosque was constructed between 1463 and 1470 and bears the name of the Ottoman conquerer of Istanbul, Fatih Sultan Mehmet. The compound of the mosque is also the site of his mausoleum. Its vast size and its great complex of religious buildings, including medreses (theological school), hospices, baths, an old hospital and a library, make it well worth a visit.

17th century Yeni mosque is situated in Eminönü neighborhood near the Egyptian Spice Bazaar next to the Golden Horn. The doves flocking its compounds in large numbers provide a sight worth seeing. The interior of the mosque have great examples of Ottoman tile work.

The Ortakoy mosque is located on the shores of the Bosphorus in Ortaköy neighborhood. It was built in 1853 by the royal architect Nikogos Balyan, during the reign of Sultan Abdulmecid, and named as Büyük Mecidiye mosque. The mosque is designed in Baroque style and has a fine location. It is composed of intimate rooms and a private area for the sultans. The wide and tall windows were designed to let in light from all around the Bosphorus. It has two minarets each with a single gallery that are be reached by a flight of stairs. The walls are made of white stone. The walls of the mosque's only dome were decorated with pink mosaics. Its recess in the wall of the kiblah was made of marble and decorated with mosaic, and the mihrab (pulpit) where the preacher stands was made with porphyry covered marble.

The Ortakoy mosque was lately restored and re-opened to public in June 2014.

The Beyazit Mosque and its complex, which is scattered throughout Beyazit Square, was built by Sultan Bayezid II and completed in the years 1500-1505. It was originally thought to have been designed by Mimar Sinan or Mimar Kemaleddin but later research suggests the architect may been Yakubsah Bin Sultan.

The complex is composed of a mosque, a kitchen, a primary school, a hospital, a medrese, a Turkish hamam, a small soup kitchen for the poor, and a caravanserai.

Beyazit Mosque is at the center of the complex. Its main dome is 16.78 meters in diameter and is supported by four pillars. An oddity is that one of the minarets is 79 meters from the other and is contiguous with the hospital. The stone and wood craftsmanship and stained glass are artistic masterpieces. The courtyard paving materials and pillars used for the reservoir for ablutions were reclaimed from Byzantine ruins and re-used. These pillars in particular demonstrate the quality of Byzantine workmanship. The soup kitchen and Caravanserai are to the left of the mosque and are used today by the Beyazit State Library. The medresse far to the right of the mosque is used as a museum by the Turkish Foundation of Calligraphy. The Turkish bath is some distance from the medresse on today's Ordu Street next to the Department of Literature. Tombs are found on the Kiblah side of the mosque. Sultan Bayezid II, his daughter Selçuk Hatun and the architect of Tanzimat Fermani, Mustafa Resit Pasa, are buried in its courtyard. 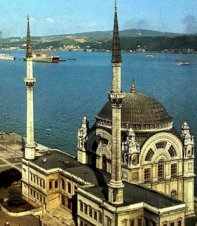 The Dolmabahce Mosque is located on the Bosphorus in the southern part of Dolmabahce Palace. Construction of the mosque began at the behest of Sultan Abdülmecid's mother, Bezmialem Valide Sultan, but when she died, Sultan Abdülmecid took over. It was completed in 1855 by the imperial architect Karabet Balyan. It is one of the highly decorated Baroque-style mosques. Being part of the palace complex, the mosque contains a front section in which the sovereign and state officials could worship and a two-storey section for the sovereign suitable for the public procession of the Sultan to the mosque on Fridays. The circular arrangement of the windows, which resembles a peacock's tail, is an unusual sight relatively unknown among the architects of mosques.

The two minarets both have a gallery. The inner door is decorated in a mixture of the Baroque and Empire styles. A valuable chandelier hangs from the alcove. The niche (mihrap) and pulpit (minber) of the mosque are made of porphyry marble.

During the 12th century, the Byzantine Empress Irene and Emperor John II Kommenos commissioned the Pantocrator, a three-church monastic complex, to serve as the dynastic mausoleum for themselves and later Byzantine emperors. In the 14th and 15th centuries Palaeiologan emperors were also buried in the multi-domed structure in the heart of what is now the old city of Istanbul.

After the Ottoman conquest in 1453, the buildings were converted to a Medresse (Koranic school) and subsequently to a mosque. One part of the Zeyrek mosque is still used for Muslim worship. The building is situated in a poor neighborhood hence the impressive structure has been allowed to deteriorate in the past. A long restoration work just being completed in 2019 and the building is re-roofed, all the windows are replaced, damaged walls repaired, and interior surfaces are saved.

Zeyrek Mosque is selected as 100 most endangered sites of the world by World Monuments Fund.