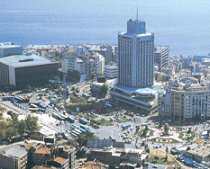 Taksim Square is located at Beyoglu district and is considered as the heart of the modern Istanbul. Many hotels and restaurants can be found here and on Istiklal Street, and underneath there is a bus terminal for public transportation, the main subway station and the funicular. The Square is also the gathering place for locals to celebrate New Year's Eve, parades and other gatherings.

The most important monument in Taksim Square is the Independence Monument (Istiklal Aniti in Turkish), at the beginning of Istiklal pedestrian street. This is also the turnaround point for the red old tram which is the only vehicle permitted on Istiklal Street beside police and government cars. The monument was made by the Italian sculptor Pietro Canonica with public donations and opened in 1928, then became the center spot of official ceremonies during national holidays. It commemorates Mustafa Kemal Ataturk, the founder of the Republic, in both of his roles; a military commander-in-chief and a statesman. On its south façade overlooking the Siraselviler Street, there is Atatürk, Ismet Inonu and marshal Fevzi Çakmak in the front and other figures behind them symbolizing the foundation of the Republic. There are also statues of two Russian generals standing behind Inonu and Cakmak: Mikhail Vasilyevich Frunze and marshal Kliment Yefremovich Voroshilov, which reminds us the military aid given by Vladimir Lenin during the War of Independence. On the north façade overlooking at Cumhuriyet Street, the Turkish War of Independence is symbolized. On the east and west façades, the Turkish Army is symbolized with a soldier holding the Turkish Flag.

Across this monument, on the other side of the Square, there is the huge settlement of Ataturk Cultural Center. The changing urban life after the establishment of the Republic pointed out that an opera building was a great need and necessity. After a long construction period of 13 years, opening under the name of Istanbul Cultural Palace in 1969 and suffering a great damage because of a fire in 1970, the place was given the name of Ataturk Cultural Center in 1978, abbreviated as AKM. Until recently many national and international concerts, meetings, exhibitions and premiers were made in AKM, especially performances of Istanbul State Theaters, State Opera and Ballet, State Symphony Orchestra, State Turkish Classic Music Chorus, and International Istanbul Festival attracted lots of spectators. It's closed since 2008 for a complete rennovation.

During the late Ottoman period Sultan Mahmut I arranged Taksim as a point where the main water lines from north of Istanbul were collected and branched off to other parts of the city. Therefore the Square took its name from the big stone reservoir located on the west side of the square; "taksim" means "distribution" in Turkish.

During some of the daily city tours in Istanbul you may have a chance to pass thru this big Square.