Islamic Art varies substantially from Western Art due primarily to restrictions in the Koran on depicting the human form. Rather than being representational of the profane world, the perfection of Ottoman art lies in the pure balance of color, line and rhythm in geometric patterns and designs.

Of the Ottoman arts, Calligraphy was the most important. Such mundane items as tax reports, property deeds and imperial edicts became exquisite works of art. This aptly reflects the bureaucratic nature of the empire, with its stress on writing and registering. Turkish calligraphers contributed to the development of new and more ornate styles of calligraphy. Each of the sultans had their own monogram in stylized script, called a Tugra. Sultan Ahmet III and Sultan Bayezit II were skilled calligraphers. In 1928 Ataturk introduced the Latin alphabet, sounding the death knell of the art of Arabic calligraphy in Turkey. Many of the greatest works were preserved in the extensive Ottoman archives and can be seen at Topkapi Palace and Ibrahim Pasha Museum (Museum of Turkish and Islamic Arts).

The "Ebru", or marbled paper, is an art practiced in Turkey since Ottoman Empire. Mineral and vegetable dyes are sprayed on viscous water over which a sheet of paper is laid in order to create unique patterns. Today this art form is still very popular in Turkey. Ebru art was inscribed in the UNESCO's Representative List of the Intangible Cultural Heritage of Humanity in 2014.

The Meerschaum, Lületasi in Turkish, is a mineral substance found only in Turkey, from which pipes and ornaments have been hand-carved since the 1700's. Meerschaum, contrary to popular belief, is not the fossilized remains of sea creatures, but a mineral: Hydrous Magnesium Silicate. It is found from 10 to 130 meters (30 to 450 feet) below the surface of the earth near the town of Eskisehir. Meerschaum's magnesium content provides strength while the hydrogen and oxygen contribute porosity. As one of nature's lightest and most porous substances, Meerschaum is a natural filter. This natural absorbency causes the pipe to slowly change color, eventually turning rich brown color, filtering the nicotine. As few Turks smoke pipes, they are made mostly for export.

Under the Byzantine Empire, Constantinople (old Istanbul) nearly bankrupted itself obtaining huge amounts of silk from China via the silk route, needed for the production of vast quantities of religious vestments and decorations. In the 6th century, a number of the closely guarded silkworm eggs were stolen by Russian monks and brought to Constantinople. Silk making quickly became a huge industry, centered in Bursa, and was inherited by the Ottomans when they replaced the Byzantines. Today, Bursa city is still an important textile center, famous for its salt-dye techniques.

The art of embroidery most likely traveled west with the nomads of the Turkic states from their Central Asian homelands. It was widely used in the military equipment of the Selcuk and Ottoman soldiers including tents, pavilions, banners, saddles and holsters richly embroidered with motifs and battle scenes, many of which are preserved in the Military Museum in Harbiye, Istanbul. Religious hangings for mosques, prayer carpets and Koranic cases were covered in graceful floral patterns in delicate colors offset with silver and gold. Many of the items of daily life, such as towels, bed coverings and veils were similarly adorned. For the Ottoman Court, silk brocades and velvets were elaborately for ceremonial purposes, often using gold or silver threads on purple velvet. Embroidery designs were based on the geometric and floral patterns used in ceramics and woven silks, though motifs and styles varied from village to village. But tulip design had always a special place in peoples heart. Some embroidery was commercially produced in workshops where men and some Christian women worked, but the quality and originality of this work was slightly inferior. The women of the harems produced magnificent work for their dowries (Çeyiz) or trousseaux and to grace their bridal chambers on their wedding nights. This art form reached its creative peak in the 16th century and then was revived again around 100 years ago with the establishment of Girls Technical Schools where it is still commonly taught. Many excellent examples can be seen in the Topkapi Palace Museum and the Sadberk Hanim Museum in Istanbul, or bought in the Grand Bazaar.

Like traditional crafts everywhere, embroidery is being killed by cheap technology. However, most grandmothers still pass their time ornamenting bed coverings and clothes for their grandchildren. The Black Sea resort of Sile near Istanbul specializes in the production of embroidered cotton clothing, towels and tablecloths.

Turkish painting in the western sense only began in the 19th century, with the founding by Osman Hamdi Bey, himself an accomplished painter, of the Academy of Fine Arts. Turkish painters were sent to France and Italy by the Ottoman Sultans, and foreign painters, mostly Italian or French, were brought from Europe to live as court painters and transfer their skills. Today this academy is known as Mimar Sinan Fine Arts University. Among the best known of the early Ottoman painters, besides Osman Hamdi Bey, we can name Seker Ahmet Pasha, Hoca Ali Riza, Sevket Dag , Ahmet Ziya and Halil Pasha. They were primarily landscape painters, with few portraits. In 1919 the Ottoman Society of Painters held their first exhibition in Galatasaray - Istanbul. Following the War, impressionism was a major influence on Turkish painters. The most successful impressionist painter was Halil Pasha. Painting continued to develop through the thirties and forties, with increased emphasis on design and subject matter. The abstract and cubist movements were popular in Turkey, the best known painters in this genre are Sabri Berkel, Halil Dikmen, Cemal Bingöl and Semsettin Arel. Today's Turkish artists are no longer bound in subject or design by their past, and a wide range of techniques and approaches are being used by the many artists at work today. There is an ever - increasing number of art galleries showcasing these young talents, with regular exhibitions of new work.

Ottoman Art consisted mainly of the traditional forms outlined above, with the exception of Turkish Miniatures. The Sultans and elite who patronized this often representational art, kept their paintings for private viewing, fearful of the religious zeal of the public. Miniature painters were divided into two categories; those who painted decorative murals and flowers, and the smaller number, many of whom were non-Muslims, who painted portraits, sieges and battle-scenes. Turkish miniatures are not as famous as Persian ones, although they are often more moving and powerful, due to the stronger shades used and to a greater attention to detail. 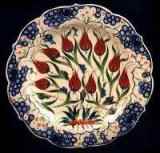 As for the Turkish pottery, the best examples are from Iznik (ancient Nicea) and Kutahya. Iznik tiles are the best examples of decorated ceramics that were produced between 15th and 17th centuries in that town, and were widely used in decorating the mosques and palaces. These exceptional pieces represent the cultural and artistic zenith of the Ottoman Empire. After Iznik, Kütahya was the most important center for ceramic production especially between 17th and 18th centuries, altough earliest examples dates back to the 14th century. Today, both Iznik and Kutahya ceramics are produced therefore this traditional ware has survived to the present day.