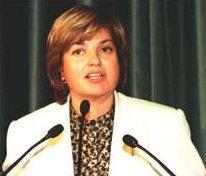 Tansu Çiller was one of the Turkish politicians, member of the Parliament, and ex-leader of the True Path Party (Dogru Yol Partisi, DYP). She was Turkey's first woman prime minister from 1993-1996's Governments.

Tansu Ciller was born in 1946 in Istanbul. She is graduated as an economist from the Bogazici University in Istanbul. She also holds a PhD from the University of Connecticut in USA. After her studies, she entered into politics and was elected for the parliament during the general elections of October 1991.

In 1993 she became the leader of the True Path Party (DYP) and formed a new coalition government led by her own party. In September 1995 the Republican People's Party (CHP) left the coalition, thus forcing Çiller to call for early elections in December, in which she couldn't achieve the number of votes she needed in the parliamentary elections as her party got only 19%, 2% short than the winning Islamist Welfare Party (RP).

In March 1996 Çiller and the True Path Party (DYP) formed the government together with Mesut Yilmaz from the Motherland Party (ANAP), leaving him in the position of prime minister. But the same year in June Tansu Ciller cooperated with Necmettin Erbakan of the Islamist Welfare Party (RP) in overthrowing her partner Mesut Yilmaz from the government. In July a new coalition is formed between Erbakan and Ciller, which positioned Çiller as Foreign Affairs minister. In June 1997 Tansu Ciller is intended to become prime minister because Erbakan resigned, but President Demirel asked Mesut Yilmaz instead to form a government.

During the elections of 2002 the DYP couldn't pass the 10% threshold thus she stayed out of the Parliament. Afterwards, she never tried again. Her politics has been marked by attempts to liberalize both the economy of Turkey and the individual rights of its people. When she was active in the politics she has over the years lost some of her former allies, among them Süleyman Demirel.

Tansu Ciller is married and has two sons. She speaks English and German fluently.