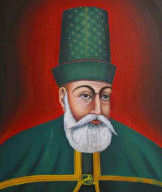 It's beleived that Haci Bektas Veli lived between 1208 (or 1209) - 1270 (or 1271), but we know very little about his life except stories and legends. All this stories were collected in a book entitled "Velayetname" or "Menakibname" written by a Bektasi dervish only several centuries after his death, therefore it can not be entirely relied on as historical facts. The book mentions that Haci Bektas was a descendant of the fourth Caliph Ali (thus, he was an Alevi, a follower of Ali) and that he came from Nishapur (Khorasan) in Turkistan. His father was Ibrahim-i Sani and his mother Hatem Hatun. He was educated by Lokman-i Perende, one of the followers of the Sheikh Ahmed Yesevi. Afterwards, he traveled to Anatolia together with his brother Mentes and lived for a while in Kayseri, Kirsehir and Sivas provinces, then settled in Sulucakarahöyük town and began to spread the teachings of the Alevi tradition in Turkey with a company of dervishes. He became a good friend of Ahi Evren, a leader of the guilds of merchants and craftsmen in Anatolia. Haci Bektas Veli died in the Sulucakarahöyük (today's Hacibektas town) around 1270.

Haci Bektas Veli wrote a number of works on mysticism (Tasavvuf) with frequent references to verses from the Koran; the best known and most important of them was "Makalat". His ideas show us that he was a sincere and mature student of mysticism, his teachings address the one's heart, urge friendship and peace, he had infinite love for humans and animals, and a great tolerance. Today, these teachings are known as the Bektashi Order doctrines. According to him, Moslems are divided into four categories: the Abids or followers of Sheriat (laws of religion); the Zahids or followers (dervishes) of the mystical orders (Tarikat); the Arifs or theistical philosophers (Marifet - enlightenment); and the Milhibs (Muhibs), the true lovers of God (Hakikat - realities). He gave a great importance to prayers which expressed the true desire and love for God, thus he considered the Muhibs (lovers) as the highest category of believers.

Haci Bektas Veli was a contemporary of the famous Mevlana Celaleddin-i Rumi; both of them were known for their great tolerance and humanitarian character, and their true love for Allah. The main difference between these two was that Mevlana wrote in persian and for the educated classes mostly, meanwhile Haci Bektas in Arabic and for peasants and soldiers in general.

Early Bektashi's had strong relations with the Ahi order; there are many similarities between these two religious orders. Many janissaries also belonged to Bektashi order during the Ottoman period, probabily because of the founders of the Janissary Corps, such as Kara Rustem, Gazi Evrenos and Seyyid Ali Sultan, had connections with the Ahi order and consequently with Haci Bektas. These janissaries were known as the "sons of Haci Bektas". When the sultan Mahmut II abolished the Janissaries in 1826, he also put an end to the Bektashi sect.

After Haci Bektas Veli's death and throughout the centuries, many Turkish poets were influenced by his doctrines. For example, the great poet Yunus Emre (14th century) expressed in his books Haci Bektas' ideals; another 14th century poet, Said Emre, also mentioned these ideas in his poems; 16th century poet Pir Sultan Abdal is another figure referring to Haci Bektas Veli's doctrines. Clearly, all of these works of the followers matched the national taste and the Alevi - Bektashi sect became a simple religious philosophy. Balim Sultan, a dervish of this order, gave its final form to the sect in the 16th century. The reputation of Haci Bektas spread into many countries, besides playing an important part in Turkish political and cultural history. After the Republic, all religious orders were viewed with suspicion and outlawed in 1925 by Ataturk, but Haci Bektas Veli's mausoleum and the monastery are still visited by pilgrims in the town, same as Mevlana's mausoleum in Konya. The mausoleum was re-open as a museum in 1964.

Hacibektas is a typical central Anatolian town at about 46 kilometers (30 miles) north of Nevsehir, near Cappadocia. The town looks very ordinary but it's named after the Sufi philosopher Haci Bektas Veli who lived here in the 14th century. He is one of the most important figures of Alevi (Alawi) order, a sect of Islam. Thus, the town is the sacred center of the Alevis in Anatolia. In mid-August every year, there are commemoration ceremonies in Hacibektas town where tens of thousands of followers gather to show their respect for the founder of the Bektashi Order of Dervishes.

The historic ages of the town date back to the Old Bronze Age, around 3rd millenia BC. Many civilizations such as Assyrians, Hittites, Persians, Hellenistics, Romans and Byzantines settled here. Then the Seljuck Turks arrived in the region by the end of 11th century AD, and the main timeline has started with the coming of Haci Bektas Veli to this small town which was called as Sulucakarahöyük back then.

The most important event in Hacibektas is the commemoration ceremonies between 16th - 18th of August. During these three days of ceremonies, people come from all over, especially from Turkey of course and from the Balkans. Sema dancers perform their ceremonial dances in their colorful traditional costumes. There are also theater and music performances which creates a festival atmosphere in this small town.

The museum is located in the center of the town. It used to be a Dergah (dervish lodge) where the students of Alevi - Bektashi sect were trained. It was closed in 1925 by the Law, and opened as a museum in 1964. After the entrance, there is a large courtyard where you can see Üçler fountain, symbolising the Creator (Allah), Mohammed (the Prophet) and Ali (the Caliph). Originally in this courtyard, there were also buildings accommodating the dervishes, stables for the horses of guests, barns, etc. In the second courtyard there is a pool, the Lion Fountain with the holy water, the Asevi (refectory), a hamam (baths), a guest house, kitchen, the Cem Hall where sacred ceremonies were held, a mosque, and the kiosk where the lodge's leader (Dedebaba) received guests. In the third courtyard there is the tomb of Haci Bektas Veli, graves of the dervishes and the mausoleum of Balim Sultan and Kalender Shah, and a wishing tree in front of the mausoleum. Before entering the mausoleum, it is customary for the visitors to embrace the round marble stone in the corner. If you can embrace it with two arms, it prooves that your heart is clean and that your intentions are pure.

The mausoleum (Türbe) of Haci Bektas Veli is known as Pir Evi. Its entrance is made of marble and called as Ak Kapi (white gate), where there are graves of the most important dervishes, and the walls are decorated with hand paintings. From there you can walk to the Kirklar Meydani hall, just passed the Çilehane. The descendants of Haci Bektas are buried on the left of the Kirklar Meydani, where the dervishes performed their ceremonial dance known as the Kirklar Semahi. There is also the mausoleum of Güvenç Abdal here. Inside the hall, there is an exhibition of earings and stone ornaments (12-edged Teslim stone) worn by the dervishes, handwriting of the Caliph Ali on a gazelle skin, examples of calligraphy, candle holders, torches, old watches, etc. Finally, you reach the burial room of Haci Bektas Veli where visitors turn around his sarcophagus three times and send their prayers.

The Çilehane is a small cave with a dark room. It's said that Haci Bektas Veli spent 40 days and nights alone in prayer to God. The tradition says that if you can pass through the narrow entrance, you'll be freed from your sins and have a pure heart. That's why you can see many people trying to do that. The amphitheater outside is especially used during the festivals for theatrical and musical performances. Monuments of Bektashi poets Yunus Emre and Pir Sultan Abdal can be seen nearby.

It was opened in 1988 in the center of the town, where you can find archaeological artifacts found during the excavations of Karahöyük and other ancient sites in the area. There is also a small Ethnography section where you can see traditional costumes, utensils, and kilims from the region.