Sardis lies in the territory of ancient Lydia, at the foot of the Tumulus Mountains and overlooking the Hermus River plain, where evidence has been found of human activity as early as the Paleolithic period (around 50,000 BC). Recent excavations have focused on the Archaic era, particularly the 7th and 6th centuries BC, when Sardis was the capital of the Lydian empire and at the height of its power, and on the Late Roman era, when the city was still flourishing. 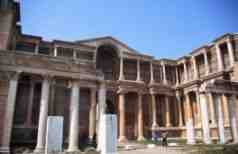 Archaeological highlights of Archaic date include the royal burial mounds at Bin Tepe, city wall, and gold-working installation on Pactalus River; important monuments of Hellenistic, Roman, and Byzantine date include the temple of Artemis, bath-gymnasium complex, Jewish synagogue, and row of shops adjoining the synagogue. Over 11,000 objects have been inventoried by the Archaeological Exploration of Sardis since its founding in 1958; a selection of the more important finds are on display in the Archaeological Museum of Manisa.

By the late second millennium BC, a modest community existed at the foot of the acropolis. According to the ancient Greek historian Herodotus, the "sons of Heracles" founded a dynasty that remained in power for "505 years, son succeeding father from generation to generation till the time of Candaules" (from around 1185 to 680 BC). By the early 7th century BC, Sardis was the capital of a growing empire, with a distinct archaeological record. 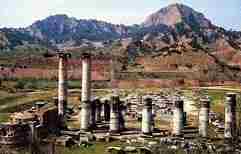 During the Merman dynasty (around 680-547 BC), the empire reached its greatest geographical extent, stretching from the Aegean Sea to central Anatolia. Herodotus credits the Lydian kings with the invention of coinage (around 6th ceuntury BC) and the construction of the great royal burial mounds at Bin Tepe, some 10 kilometers (6 miles) to the northwest of the acropolis. Kings Gyges and Croesus were particularly renowned for lavish gifts dedicated in Greek sanctuaries. In 547 BC, Sardis was sacked by Cyrus the Great and remained under Persian control until 334 BC, when it was captured by Alexander the Great. The city continued to flourish during Hellenistic and Roman times, when ambitious construction projects were initiated, including the temple of Artemis and bath-gymnasium complex. A section of the bath - gymnasium complex was later remodeled to accommodate a Jewish synagogue. This synagogue, now partially restored by the Harvard-Cornell Expedition, is the largest early synagogue yet excavated in the Mediterranean world.

During the early Christian period Sardis became one of the Seven Churches which were mentioned by Saint John in "The Book of Revelation".