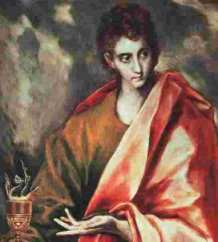 John the Evangelist or Saint John the Divine as the son of Zebedee, and his mother's name was Salome [Matthew 4:21, 27:56; Mark 15:40, 16:1]. They lived on the shores of the sea of Galilee. The brother of Saint John, probably considerably older, was Saint James. The mention of the "hired men" [Mark 1:20], and of Saint John's "home" [John 19:27], implies that the condition of Salome and her children was not one of great poverty.

St. John and James followed the Baptist when he preached repentance in the wilderness of Jordan. There can be little doubt that the two disciples, whom Saint John does not name (John 1:35), who looked on Jesus "as he walked," when the Baptist exclaimed with prophetic perception, "Behold the Lamb of God!" were Andrew and John. They followed and asked the Lord where he dwelt. He bade them come and see, and they stayed with him all day. Of the subject of conversation that took place in this interview no record has come to us, but it was probably the starting-point of the entire devotion of heart and soul which lasted through the life of the Beloved Apostle.

John apparently followed his new Master to Galilee, and was with him at the marriage feast of Cana, journeyed with him to Capernaum, and thenceforth never left him, save when sent on the missionary expedition with another, invested with the power of healing. He, James, and Peter, came within the innermost circle of their Lord's friends, and these three were suffered to remain with Christ when all the rest of the apostles were kept at a distance [Mark 5:37, Matthew 17:1, 26:37]. Peter, James, and John were with Christ in the Garden of Gethsemane. The mother of James and John, knowing our Lord's love for the brethren, made special request for them, that they might sit, one on his right hand, the other on his left, in his kingdom [Matthew 20:21]. There must have been much impetuosity in the character of the brothers, for they obtained the nickname of Boanerges, Sons of Thunder [Mark 3:17, see also Luke 9:54]. It is not necessary to dwell on the familiar history of the Last Supper and the Passion. To John was committed by our Lord the highest of privileges, the care of his mother [John 19:27]. John [the "disciple whom Jesus loved"] and Peter were the first to receive the news from the Magdalene of the Resurrection [John 20:2], and they hastened at once to the sepulchre, and there when Peter was restrained by awe, John impetuously "reached the tomb first."

In the interval between the Resurrection and the Ascension, John and Peter were together on the Sea of Galilee [John 21:1], having returned to their old calling, and old familiar haunts.

When Christ appeared on the shore in the dusk of morning, John was the first to recognize him. The last words of the Gospel reveal the attachment which existed between the two apostles. It was not enough for Peter to know his own fate, he must learn also something of the future that awaited his friend. The Acts show us them still united, entering together as worshippers into the Temple [Acts 3:1], and protesting together against the threats of the Sanhedrin [Acts 4:13]. They were fellow-workers together in the first step of Church expansion. The apostle whose wrath had been kindled at the unbelief of the Samaritans, was the first to receive these Samaritans as brethren [Luke 9:54, Acts 8:14].

He probably remained at Jerusalem until the death of the Virgin, though tradition of no great antiquity or weight asserts that he took her to Ephesus. When he went to Ephesus is uncertain. He was at Jerusalem fifteen years after Saint Paul's first visit there [Acts 15:6]. There is no trace of his presence there when Saint Paul was at Jerusalem for the last time.

Tradition, more or less trustworthy, completes the history. Irenaeus says that Saint John did not settle at Ephesus until after the death St. Peter and St. Paul, and this is probable. He certainly as not there when Saint Timothy was appointed bishop of that place. Saint Jerome says that he supervised and governed all the Churches of Asia. He probably took up his abode finally in Ephesus in 97. In the persecution of Domitian he was taken to Rome, and was placed in a cauldron of boiling oil, outside the Latin gate, without the boiling fluid doing him any injury. [Eusebius makes no mention of this. The legend of the boiling oil occurs in Tertullian and in Saint Jerome]. He was sent to labor at the mines in Patmos. At the accession of Nerva he was set free, and returned to Ephesus, and there it is thought that he wrote his gospel. Of his zeal and love combined we have examples in Eusebius, who tells, on the authority of Irenaeus, that Saint John once fled out of a bath on hearing that Cerinthus was in it, lest, as he asserted, the roof should fall in, and crush the heretic. On the other hand, he showed the love that was in him. He commended a young man in whom he was interested to a bishop, and bade him keep his trust well. Some years after he learned that the young man had become a robber. Saint John, though very old, pursued him among the mountain fastnesses, and by his tenderness recovered him.

In his old age, when unable to do more, he was carried into the assembly of the Church at Ephesus, and his sole exhortation was, "Little children, love one another". He also brought Virgin Mary up on Panaghia Kapulu (Bülbül Dag, Nightingale Mountain) to protect her from the persecutions.

The date of his death cannot be fixed with anything like precision, but it is certain that he lived to a very advanced age. He is represented holding a chalice from which issues a dragon, as he is supposed to have been given poison, which was, however, innocuous. Also his symbol is an eagle. He's one of the most important saints of the Christian world.

After his death he was buried nearby Ephesus. In the 4th century Byzantines build a small church over his tomb and finally in the 6th century Justinian I build a cathedral which was destroyed by the Arab raids between 7th and 8th centuries. Today his grave is recognized as a shrine by Vatican and it stands in Selcuk, nearby Izmir, in the Aegean region of Turkey. It is one of the many religious sites in western Anatolia.