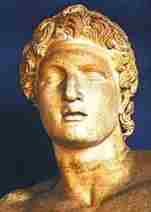 Alexander the Great, one of the world's greatest military commanders, was born in 356 BC in Pella - Macedonia, the son of King Philip II of Macedonia and Olympids, daughter of King Neoptolemos. The legend says that he was born the same night when Herostratus, a lunatic who lived in Ephesus, burnt down the Temple of Artemis. Between 342 and 340 BC his tutor was the philosopher Aristotle. Alexander had already distinguished himself in battle at Chaironaia in 338 BC when he secured the throne as Alexander III by eliminating his rivals after the death of his father in 336 BC at the hands of Pausanias, possibly a hired assassin. Appointed Commander of the Corinthian League he moved first against the Thracians and the Illyrians and put down a rising by the Thebans (335 BC) in Greece. In 334 BC Alexander, with his army of 35-40 thousand men, embarked on a campaign against the Persians, crossing the Hellespont (Dardanelles), winning the battle on the Granikos in Anatolia in the spring, occupying Gordion (remembers the story of him cutting the legendary Gordian knot), then marching over the Taurus mountains to Cilicia and defeating Darius III, the Persian king, in November of 333 at Issus, north of present-day Iskenderun. This left the way open to Egypt where he founded the city of Alexandria and had his divine origins and claim to power confirmed by the oracle of Zeus Ammon at the Siwa oasis.

From Egypt Alexander and his army marched to Babylonia, where he again defeated Darius, this time decisively, at Gaugamela on the Mossul plain, now in Iraq. He carried on into Persia (todays Iran) and finally began his Indian campaign (327-325 BC), getting as far as the Hindu Kush and the Punjab before his exhausted men forced him to turn back at the Indus delta. Sailing back for part of the return journey through the Persian Gulf, Alexander and his remaining men made the grueling crossing of the desert and eventually reached Babylon where in 323 BC he died of a fever while preparing for an Arabian campaign.

Alexander's declared policy, in part already embarked upon, of conciliation and of consolidating the great new empire he had created from so many disparate pieces, was doomed to failure. His empire fragmented almost immediately as rival claims were lodged by his successors. The empire was divided into four major portions: Cassander ruled in Macedonia, Lysimachus in Thrace, Seleucus in Mesopotamia and Persia, and Ptolemy I Soter in the Levant and Egypt.