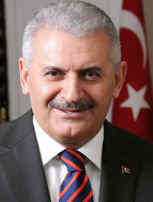 Binali Yildirim is a Turkish politician who was born in Refahiye district of Erzincan province on 20th of December 1955. He studied and got his PhD at Naval Engineering and Marine Sciences faculty of the Istanbul Technical University (ITU), then worked as an assistant and researcher at the same university.

He worked as chairman and director in public sector such as at the General Directorate of Turkish Shipping industry and at various shipdocks between 1978-1993, and at Istanbul Fast Ferries (IDO) Municipal ferry company between 1994-2000.

After the general elections of 2002 he entered into the Parliament as a deputy of AKP party and served as the Minister of Transportation, Maritime and Communication during the 58th, 59th and 60th Governments between 2002-2013 and 2015-2016. Between 2014-2015 he served as Senior Advisor to President Recep Tayyip Erdogan.

After the resignation of Prime Minister and AKP leader Prof. Dr. Ahmet Davudoglu in May 2016, the AKP party hold a general Congress and voted for Mr. Binali Yildirim as their next leader. Then he formed Turkey's 65th Government and became Prime Minister on 24th of May 2016. After the Referendum on 16th of April 2017 on the modifications of the Constitution, President Erdogan became the leader of AKP. On 19th of July 2017 the 66th cabinet was formed and Mr. Yildirim continued as Premiere until 2018, when the seat of Prime Minister was no longer active anymore due to the new Presidential system in Turkey. He was elected as a parliamentary deputy during the elections of 24 June 2018, then elected as the president of the parliament and stayed on duty until 18 February 2019.

He had to deal with the Coup d'Etat tentative of 15-16 July 2016 when a small fraction of the army have rebelled against the Government.

Mr. Binali Yildirim is married and has three children.