The 1926 civil code made by the Parliament under the presidency of Atatürk outlawed polygamy and repudiation, which are provided for in Islamic law of some Moslem countries, albeit under strict regulations. In their place came civil marriage and divorce, both to be registered with the civil authorities and both entailing equal rights for the man and the woman. Marriage of a Muslim woman with a non-Muslim man became legally possible. "Religious" marriages contracted before a member of the religious establishment were not recognized as lawful unions, and their progeny were considered illegitimate.

Like other reformist legislation, the new civil code initially had only limited effect in the countryside. Polygamous marriages did not cease immediately, and in some cases the marriage to one wife was officially registered and the children of the other wife or wives, married in religious ceremonies, were then registered as her offspring. More important and longer-lived was the continued practice of "illegal" religious marriages (called imam marriages), which continued to produce "illegitimate" offspring. This has necessitated promulgation of six special laws since 1926, affecting a total of 2.9 million children rendered officially illegitimate by their parents' manner of contracting marriage. 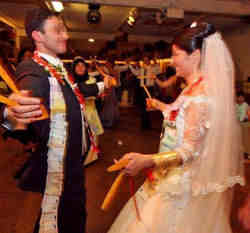 Traditionally, marriage had been, and frequently continues to be, a contract negotiated and executed by the betrotheds' families and blessed by a representative of the religious establishment. Representatives of the bride negotiated the contract with those of the groom, stipulating such terms as the size and nature of the bride-price paid by the groom's family to the bride's, and certain conditions of conjugal life. After a series of meetings between the two families, the exchange of gifts, and the display of the trousseau, the marriage was formalized at a ceremony presided over by a religious official. The ritual left no doubt that the consenting units were families rather than individuals. In like manner, the relations of the young couple were a family matter.

In order to regulate the country with the civil rights of other modern countries, the reformers rejected the traditional marriage. The civil wedding stipulated in the new family code involves no patriarchs, negotiations, or contracts. Instead, bride and groom, as individuals, swear vows before two witnesses and a representative of the state who registers the union. Despite increasing frequency of civil marriage, however, the realities of courtship and marriage in the traditional segments of society have not been completely reformed in the countryside. In the late 1980s, many couples, especially in the rural areas, engaged in two ceremonies, a religious one to satisfy their families and a civil one to entitle them and their children to government social benefits, as well as to confer legitimacy on their children before the law. Village opinion now tends to hold that only a foolish woman would omit the highly beneficial protection that terminates the husband's right to repudiation and entitles the wife to sue for civil divorce. Patriarchs on the bride's side increasingly demand a civil wedding as one of the conditions of the traditional marriage negotiations.

Despite government attempts to outlaw it as a backward custom, during the late 1980s the traditional practice of paying the bride-price continued in some rural and even some urban areas. The payment of the bride-price involved considerable expenditures and often required the cooperation of a number of kin. In the 1970s, an estimated 63 percent of rural marriages and 19 percent of urban marriages still involved bride-price payments to the bride's family. The exact amount and the terms of payment formed a part of the premarital negotiations. Ordinarily, the amount varied directly with the status of the families involved and inversely with the closeness of their blood relationship. For this reason, among others, marriage among closely related kin remained common in the rural areas. The fact that in case of divorce the bride-price would not entirely be returned to the groom or his family provided some protection to the bride. Today this tradition of bride-price is not practiced much in the cities. 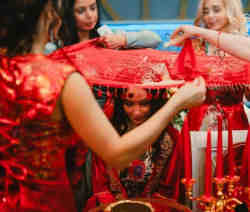 The ceremony held one day before the wedding in the home of bride and groom is called the henna night. It generally takes place at the girl's home and among women, although either side can elect to host it.

Usually dry henna brought by the bridegroom's family is broken to pieces in a silver or copper vessel by a woman whose father and mother alive, not experienced any separation. After preparing the bride, veil ornamented with red flake is placed over her head, and she is brought into the middle with hymn and folk songs about henna.

Henna that has earlier kneaded with water is brought in on a tray surrounded by candles and placed in the middle of the room. In some places, the henna is first put on the hands of the bride and then distributed to the guests; in other areas the henna is first distributed to the guests, and only after everybody has left is it placed on the bride's hands. If the woman wishes so, henna can also be placed on her feet and hair. Considerable attention is paid to charging a woman with a happy marriage, called the “basi bütün” (meaning “whose head is complete”, in a sense, this describes her as someone who has a complete family with husband and children and whose marriage is whole, not separated by divorce) to knead and distribute the henna and apply it to the girl's hand. The woman places the henna on one of the bride's hands, and a young girl places it on the other. Before the henna is applied, coins or gold are also placed in her hands. After woman who came together for dying henna leave, close friends of the bride remain with her and enjoy themselves till morning.

Dying ceremony of henna is different according to regions. The henna so dyed has such names and types as “iplik kinasi” (henna for yarn), “sivama” (smearing), “kusgözü” (bird eye).