Like other Anatolian cities, Erzincan's history starts with the Hittites but the importance of the city rose after the Turks conquered it during Seljuk period. There are lots of historical remains which mostly have been damaged.

Erzincan, the principal city of its province, lies 688 kilometers (427,5 miles) east of Ankara on a fertile plain. The highly decorated and hand fashioned copper vessels and wares of Erzincan maintain a long tradition of the area's fame in metal work.

Bolkar, a ski slope 40 kilometers (25 miles) to the west, provides facilities for winter sports enthusiasts. There is a 1100 meters long and 200 meters wide medium-hard track, with a ski lift and a baby-lift. Best season is between December and April. 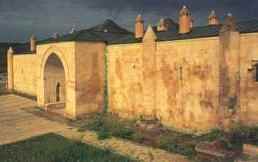 Many of the magnificent bronze objects in Ankara's Museum of Anatolian Civilizations were found nearby at the Urartian site of Altintepe, east of Erzincan. At Tercan, the round 12th century mausoleum of Mama Hatun with its beautifully carved stone portal is worth a detour off the main road. Girvelik, in the same southeasterly direction, provides ideal picnic spots where you can eat a packed lunch and relax to the sound of water tumbling over rocks.

Kemaliye, situated on the blanks of the Firat river is one of the most beautiful and green areas in the region. It is known for its lovely countryside and scenic views; especially popular with trekkers. Kemaliye is also known for its traditional homes with their artistic detail. Karanlik Bogaz near Kemaliye is one of the best places for photo safaris, canoeing and rafting.

The Cirit (Javelin), played with wooden sticks on horse, is one of the most traditional sports in the area which was introduced to Anatolia by the Turkic States. This game is still proudly practiced today during festivities and weddings.

After the recent earthquake in 1992, the city was badly damaged.