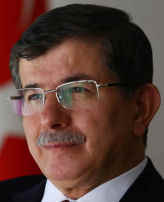 Ahmet Davutoglu was born in 26th of February 1959 in Konya. He was graduated from Bosphorus University in 1983 with double major on Political Science and Economics, and then also held his Masters and Doctorate degrees at the same university. He teached at the International Islamic University of Malesia between 1990-1993. Between 1995-2002 he worked in various universities in Istanbul as a teacher and at administration. In 1999 he became a Professor and wrote various articles on foreign policies which are translated into several languages. He was also prized and awarded many times on international arena between 2010-2012.

In November 2002 he was appointed as the chief consular of Foreign Affairs of the Prime Minister until 2009. He became the Foreign Affairs Minister during Erdogan's Government. In August 2014 he became the leader of AKP party then the Prime Minister until May 2016, when President Erdogan had an influence on his resignation from both Turkish Premiere and leadership of AKP. Then in 2019 he founded a new political party; Gelecek Partisi.

Prof. Dr. Ahmet Davutoglu is married and has four children. He speaks English, German and Arabic.