According to Greek mythology, Amazons were a warlike tribe of women descended from the god of war Ares, and the naiad Harmonia. They originated from the area around the Caucasus Range and settled on the bank of the Thermodon River in Pontus, Asia Minor, and founded the town of Themiscyra on the coast of the Euxine (modern Terme in Samsun province, on the Black Sea coast of Turkey).

For the continuation of the Amazon race, the women mated with the neighboring Gargarean men for a short period each year. Male children born from these unions were either sent to the Gargareans or killed. Another version of the myth tells of a number of men kept for mating purposes, but had the status of slaves, and were allowed to perform only those tasks executed in other countries by women. Legend also says that the legs and arms of these men were mutilated to prevent their challenging the Amazons' power.

Women entirely ruled their society, and two queens, one for defense and one for domestic affairs, shared the sovereign rule. Whether men were or were not included in the Amazon state, only women bore arms, not only defending their own country, but making conquest expeditions into neighboring territories. They fought both on foot and on horseback, carrying crescent shields and wielding spears, bows and battle axes. In some myths, it is said female children had their right breast seared in order to draw a bow and throw javelins more efficiently as adults. 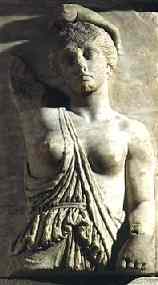 War, hunting, agriculture and training girl Amazons were their principal pursuits. It was said they were the first humans to ride on horseback. The Amazons were especially devoted to the goddess of hunting, Artemis.

Stories about the Amazons belong to the earliest Greek sagas. Homer mentions them in a way which shows that they were familiar to his audience. When in historical times the Greeks became familiar with the Thermodon region and found no Amazons there, they supposed either Heracles (Hercules) had destroyed them all, or they had been driven away. Thus in later legends, the Amazons were moved further and further away from their original homeland, but they were always located on the fringe of the world as it was then known to the Greeks. They were said to be of Scythian origin from Colchis (south of the Caucasus) and there was also supposed to be a race of Amazons in Africa. They were, in any case, always foreign to the Greek homeland, and to the Greeks, like all foreigners, they were viewed as barbarians.

The Amazons were a favorite subject for sculptors and painters. In art of the earliest periods, they are dressed exactly like warriors, but usually with one breast bare. After the Persian Wars (499-448 BC), for example, on Greek vases of the great classical period they are represented in oriental garb, wearing caps and trousers, and pictures of them relate more to known legends about them. They are never depicted as having lost one breast, in spite of the Greek belief their name meant "breastless".

Various explanations of the origins of the legends about the Amazons have been put forward. Some writers trace them to the armed slave-girls who served certain Asian deities. The association of the Amazons with Artemis supports this theory, but the story is more likely to be an imaginative elaboration of reports about matriarchal tribes in Anatolia, or of tribes in which the women led a freer and tougher life than they did in Greece. The persistence of the legend up to the 2nd and 3rd centuries AD, and its popularity as a theme in the arts show the Amazon myth had a deep appeal to the Greeks.

Another legend says that the city of Ephesus in Asia Minor was founded by the Amazons, and their queen, Ephesia, gave her name to the city.

Aella
During the Greeks' attempt to take Hippolyta's golden belt, Heracles slew the Amazon Aella ("whirlwind") who was known for wielding a double-ax.

Antiope
The Amazon queen Antiope was kidnapped by Heracles from her homeland, brought to Athens and presented to Theseus, the mythical king of Athens. Theseus took her as his wife and she bore him a son named Hippolytus after Antiope's sister Hippolyta. She is the only Amazon known to have married. Fighting by her husband's side during an Amazon attack on Athens, one of her Amazon sisters, Molpadia, ran her through with a spear.

Hippo
Hippo's name means "horse", a word found in many Amazon names. She was one of the queens who helped found the cities of Ephesus, Smyrna, Cyrene, and Myrina. After conquering Asia Minor and Syria, the warrior woman set up a wooden image of Artemis near a beech tree in Ephesus. There the Amazons would perform a shield dance with rattling quivers, beating the ground in unison to the accompaniment of pipes playing a wild, warlike melody.

Hippolyta
Hippolyta was one of the greatest queens of the Amazons and one of the most beautiful and strongest women of her time. She wore the golden girdle of Amazonian queenship, a gift from her father, Ares. This royal belt became the object of Heracles' ninth labor. Hippolyta was attracted to Heracles and was ready to give him the girdle until Hera, Heracles' nemesis, disguised herself as an Amazon and spread the rumor that the queen had been robbed by him. The Amazons rose to assist their queen and a fight ensued. In the battle, Heracles, believing Hippolyta plotted against him, killed her, took the girdle and left.

Lysippe
In Greek legend, the Amazon queen Lysippe had a son, Tanais, who offended Aphrodite by his scorn of marriage and his devotion to war. In revenge Aphrodite caused him to fall in love with his mother. He was so shamed by this that he flung himself into a river, drowning himself. Lysippe lost her sorrow in work consolidating her queendom, building the city of Themiscyra and raising temples to worship Artemis. It is said she led a force of women that were the first to use cavalry in battle.

Marpesia
One of the great military queens, Marpesia began a victorious campaign at the Black Sea coast and soon conquered Thrace and Syria. Then, with Queen Hippo she marched through Ephesus and Cyrene, finally reaching the Aegean Sea. After settling down to rule her empire, she was called back to the battlefield to defend it from the uprising of her subjects and lost her life in the process.

Omphale
The Amazon queen Omphale was said to have ruled the southern empire of Libya. Omphale bought Heracles in a sale of slaves and had him weave, spin and card wool as well as many other duties. If he made mistakes she would beat him with a golden sandal. Eventually growing bored with him, Omphale sent Heracles back to his homeland.

Otrere
Otrere meaning "nimble" was the name given in some tales to the ancestral goddess of the Amazons. It was also a title of distinction bestowed upon women leaders.

Pantariste
Pantariste killed the Greek messenger Tiamides, who was on his way to alert his countrymen about the Amazonian revolt against the Greeks' attempt to steal Queen Hippolyta's belt.

Penthesilea
One of the greatest Amazon warriors, Penthesilea led a troop to Troy to fight the Greeks. There she engaged Achilles in single combat that was a close combat but was finally killed. Achilles mourned her death when he tore off her helmet and saw her beauty. Thersites, reputed to be the ugliest Greek at Troy, jeered at Achilles' grief and accused him of unnatural lust, whereupon Achilles killed him. This enraged some of the Greeks and Diomeds, a cousin of Thersites, threw Penthesiliea's corpse into the River Scamander.

Thalestris
The Amazon queen Thalestris visited Alexander the Great (356-323 BC) during one of his Asian campaigns, wishing to have a daughter by such a famous general. She stayed with him for 13 days before returning to her own country. Writing more than 400 years later, Plutarch lists no less than 14 authorities who mention this tale, though nine of them, he says, dismissed it as 'complete fiction', and it was laughed at after Alexander's death by his successor in Thrace, Lysismachus.