Agriculture is still the occupation of the majority of Turkish people, despite the share of industry and services are raising constantly. Turkey is one of the few self-sufficient countries in the world in terms of food. Turkey's fertile soil, adeguate climate, and abundant rainfall permit growing almost any kinds of crops. The farming is conducted in all of the regions in Turkey, but it's less practiced in the mountainous eastern regions where the main activity is based on animal husbandry which has a share of one-fourth of the gross value of the total agricultural production. 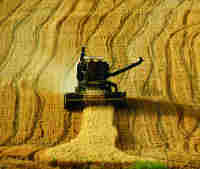 The rapid industrialization of Turkey after 1930's and government policies caused agriculture's share to decline in overall income. The share of the agricultural sector in the GNP was almost 50% in 1950, then 25% in 1980, 15.3% in 1990, 11% in 2005, 8% in 2016. This caused the fall of economic standards of the farmers and contributed to emigration from rural to urban areas. But in 1990's, the State encouraged the farmers to adopt modern techniques with the mechanization and has provided infrastructural conveniences for irrigation and cultivation contributing to the development of the agricultural sector. The most important of these projects is the Southeast Anatolia Project (GAP).

Despite agriculture's relative decline in the last 30 years, the sector still plays an important role in foreign trade. Turkey exports many agricultural products such as cereals, pulses, industrial crops, sugar, nuts, fresh and dried fruits, vegetables, olive oil, and livestock products. The main export markets are the European Union, the United States, and the Middle East. Around 19.2% of total employment in Turkey in 2018 was in agriculture sector, and total exports of agricultural products topped to 15 billion USD (as of 2017).

The agricultural sector is currently undergoing a restructuring process in order to achieve harmonization with the EU regulations. Turkish farmers enrolled in the Farmer Registry System receive Direct Income Supports from the government, a premium system is practiced, and they receive chemical fertilizer support and diesel fuel support, as well as training for the latest agricultural techniques. The Agricultural Bank of Turkey (Ziraat Bankasi) provides most loans to farmers and cooperatives, much of the World Bank's lending for agricultural projects in Turkey is channeled through this bank.

Animal husbandry is an important part of Turkey's agricultural sector and economy. The share of animal husbandry in the total agricultural output is around 25%. As of 2015 the number of cattle totals approximately 15 million, sheep around 34 million, goat around 11 million. They are kept mainly on the grazing lands of Anatolia. Wool is a significant export of Turkey, which is also used internally for making world-famous Turkish carpets. Around 18,6 million tons of milk was produced from these animals in 2015.

Poultry production expanded rapidly after 1980's, Turkey has reached the level of developed nations in this sector: it's the world's 10th and Europe's 2nd biggest poultry meat producer with 2,1 million tons of poultry meat (as of 2017). Meanwhile, annual chick production in the country reaches 640 million, including 40 million for egg production. In 2017 around 17,9 billion (1,2 million tons) of eggs were produced.

Despite Turkey's long coastline and large freshwater bodies, fishing is an underdeveloped industry compared to other sectors. As of 2017, the annual catch is 354,318 tons for the sea fish and around 276,502 from aquaculture. The Black Sea, Sea of Marmara, Aegean Sea and the Mediterranean constitute the main fishing grounds. After 1990's, the fish farms and aquaculture were supported by the State and their numbers have grown. Today, Frogs' legs, snails, shrimp, and crayfish are some of the sea products exported. Fishery production in 2017 reached 630,820 tons in total, exports of fishery products were 156,681 tons, imports were 100,444 tons.

Source: partly from the Directorate General of Press and Information (BYEGM) and from Turkish Statistical Institude (TUIK)