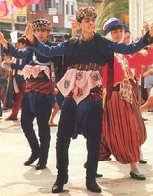 Zeybek Dances, a dance of western Anatolia or its music, appear to our minds whenever Western Anatolian Folk Dances especially of Izmir province, Aydin province, Denizli province, Balikesir and Mugla provinces are told.

Zeybek dances are various and have about 150 types, however they can be gathered into two main classifications:

In Izmir, Zeybek Dances that are to be danced whether single or with a group, display the Efe's and Zeybek's self-assurances, mainly braveness and their challenges. The Zeybek's who show braveness and honestly with all their excitement are a symbol of dignity and valor.

The musical instruments that are used in Zeybek dances are clarinet and drum in the open areas, baglama (a plucked instrument with 3 double strings and a long neck) is used in the closed areas. The double clarinet is traditional while the first clarinet plays the melody the other one accompanies it.

The costumes of Efe and Zeybek are told below;

Efe wear a reddish helmet which is made of broadcloth and this helmet called "Kabalak". Efe tie "Posu" that the young girls embroidered around their helmets. The blue shalwar (baggy trousers) that Efe wear are called "Çasir Menevrek". These shalwars' length extends to the knee-caps and they are open in both winter and summer. The flank side of these "Çasir Menevreks" are black-silk caftan (robe). They wear the tassels that is called "Koza" and they are long. This tassel must be 100 drachma (400th part of an okka). If the jackets that the Efe wear have sleeves, this type is called "Cepken" and if not, then it is called "Çamadan". These are made of blue or dark-blue broad-cloth and they are embroidered with the black-silk caftan with various motifs and Zeybeks wear silver-thread cepkens. The mintan with thin round disks and without color is called "Alakye", is worn to the waist and leather weapon case which is tied to it. In this weapon case "Kulakli Yatagan Knife" takes place.

Besides a handkerchief a silver tobacco case, an amber cigarette holder and two okkas of clean wool-shorn is used in case of an injury and from flank side of the weapon-case, an iron stick that is called "mese" leans over. He uses his knife to sharpen this Pala or to defend himself in case of a confrontation against agony. Two Efe never shoot each other, because this signifies "cowardness".

Efe wear "Pazubent" that is covered with silver to their arms, an "enam" and a silver "hamay" lean over on their breasts. Pazubent is worn from the childhood to the end of life. Efe's weapons are silver repose work that is embroidered with a silver repose. They wear cross-cartridges called "Karlilik" on their breasts. The embroidered boots that Efe wear are called "Kayalik" only Efe wear them. Zeybeks and infants wear "Çariksi" (slippers). Both in winter and summer the wool socks are worn and knee-pad that is called "Kepmen" are worn on it. The daggers which are put "Kepmen" are used in dances. Efe and Zeybek are distinguished from each other with the difference in their mintans; Efe's mintans are not buttoned up, their breasts are seen.

Meanings of the figures

Some differences are seen in their figures of walking, turning, rising, knee-downing and holding up their arms (the walking with or without ricochets) and turnings in the Zeybek plays display Zeybek's self-assurance, honesty, braveness and challenging.