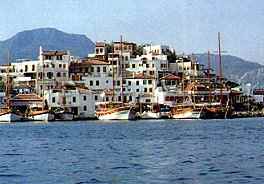 The Carians settled in south western part of Anatolia, between the Menderes River and Köycegiz Lake and named this area as Caria. The Datca Peninsula was also located within these borders, and today it's in the Aegean region of Turkey.

Around 1000 BC Dorians invaded the southern part of Caria and established the Dorian Hexapolis with the cities of Cnidus (near Datça), Halicarnassos (modern Bodrum), Cos (Greek island), Kamiros, Lindos and Ialissos (the last three were in Rhodes). Cnidus was also the center of this City Union. It had quite an effective political and economic structure considering the period.

During the Persian invasion in Anatolia, Cnidus fell under Persian attack (546 BC). In defence, the Cnidians tried to separate themselves physically from the mainland by digging a channel through neck of the peninsula (today Balikasiran). Unfortunately the rocks were very sharp and hard. Many Cnidians were injured as a result and an envoy was sent to question the oracle at Delphi. According to the oracle, Zeus did not approve of their work and the Cnidians abandoned their project. The Persians entered the Peninsula without any resistance and were greeted peacefully by the Cnidians. Later, Cnidus was dominated by in turn of Athenian Empire, Spartans, Alexander the Great, Roman Empire and Byzantines.

In 1220 AD the Menteshe Tribe (a Turkish tribe) conquered Datça. In 1390 sultan Yildirim Beyazit attacked the Menteshe Principality and the Peninsula passed to the Ottoman rule. During the reign of sultan Resad in the 18th century, the name of the Peninsula was changed to "Resadiye". After the Turkish Republic in 1923, the Peninsula regained its old name of "Datça". Today, Datça is a district of the province Mugla and is located at 70 kilometers (43 miles) west of Marmaris.

Some of the important sights to visit in Datça are: The mosque in Hizirsah village was inherited from the Seljuks period. It has been restored and is well worth seeing. Eski Datça (Old Datça, 4 kilometers) with beautiful old stone houses, holiday and permanent residences of many Europeans and Turks, is showing typical architecture of the area. Regular minibus services are available to Eski Datca. Cnidus was famous for its naked statue of Aphrodite. Kizlan and its windmills, which have become a symbol for Datça, is worth visiting. There are the remains of some ceramic manufactures between Old Datça and Hizirsah village which have been worked during the 4th century BC.