Oil Wrestling is one of the most popular sports in Turkey. Yagli gures means literally oiled wrestling. The wrestlers wear tight short leather trousers called "Kispet", made of water buffalo leather weighing approximately 13 kilograms (29 pounds), and they cover themselves with olive oil. Matches take place throughout the country but the most famous and most important tournament takes place in Edirne by the end of June and beginning of July, or at the end of July, every year. In 2020 the matches of the 659th edition were scheduled between 29 June - 5 July but unfortunately it's been canceled due to coronavirus threat, but 660th edition was held between 10-11 July 2021 where the wrestler Mr. Ali Gurbuz won the final match and holds the title of "bas pehlivan". It's a big fair as well with music and celebrations and it goes on until the morning. Usually lamb roast is a very popular food. In the entertainments, belly dancing is accompanied by Turkish traditional musical instruments 'davul' (drum) and 'zurna' (a type of flute) and singings. 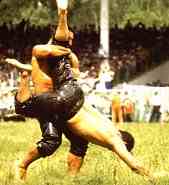 The history of the oil wrestling tournaments links back to the Persian Era, a period starting from 1065 BC according to Ferdowsi's Shahnameh. The legendary pehlivan (wrestler) of this era is Rostam, constantly saving his country from the evil forces. The word "Pehlivan" for a wrestler was first used in the period when the Parthian (238 BC - 224 AD) expelled the Greeks from Iran. From this period we can trace the basic rules. During the period Islam was brought into Asia Minor, spirituality and philosophy became part of the physical garment of the pehlivan. Turkish Oil wrestling style became established as a sport on its own during a campaign launched by Ottoman sultan Orhan Gazi to capture Rumeli (Thrace) - the European side of Turkey's Marmara region. In that time the sultan and his brother, Süleyman Pasha and 40 warriors captured forts in the region of what is now the Greek / Turkish / Bulgarian border. On the place they camped, they started wrestling for fun. Two of them wrestled for hours but neither managed to win. Süleyman Pasha promised the winner a leather pant (kispet) when they would continue their match during the annual Spring festival (May 6), held in Ahirköy. They wrestled from morning till midnight, became exhausted and both died. Their friends buried them under a fig tree and left. When the soldiers visited the burial site years later, they noticed that several springs had sprung up on the site and named the place Kirkpinar (Forty Springs). In time, they started to organize oil wrestling tournaments and the sport became a tradition in Edirne province. This city was the capital of the Ottoman Empire for 91 years and is every year the place of the tournament.

The winner at the Edirne Kirkpinar gains around 100.000 US Dollars along with the title "Champion of Turkey." The winning wrestler in this category receives The 'Baspehlivan' of the Year award. The wrestler that obtains this award for three consecutive years receives 1.5 kilograms weight and 14 carat Golden Belt, alongside his gold and cash awards. Banks, companies or individual people that want their advertisement also give cash awards to the wrestlers. The organizer, Municipal Government of Edirne, distributes both gold and cash awards to the top three's and pays cash to the ones that could not get an award for their travel expenditures. This is called 'yolluk' (for the road). The "baspehlivan" is invited to various wrestling championships. In Turkey, the oil wrestling season continues for 8 months of a year.

Any wrestler from a traditional upbringing has an apprentice. The master trains with his apprentice: "cirak," and teaches him the art of oil wrestling. After the master wrestler quits the "arena of the brave," his apprentice continues his tradition. The wrestlers attend other wrestling championships before coming to Kirkpinar. The referees closely know the technique and mastery of each wrestler. The categories are divided into groups called "boy." In this arrangement, weight is not a deciding factor. A wrestler weighing 120 kg (265 pounds) might not be allowed to wrestle in the "bas" (head) category. To wrestle in the head category, one must have had a final in "bas alti", one step lover than the "bas" category. A successful wrestler in regional championships might be allowed to wrestle in the "bas" category if he is found to be superior to his competitors.

In Olympic wrestling, holding from the wrestling suit is regarded as a foul. In oil wrestling, most games are made on the kispet. The wrestlers try to put their hands go through the kispet of their opponents as much as possible. To a kispet tied well, it is not possible to put a hand or arm through. The pehlivan that can achieve putting his hand through his opponent's kispet, can control him this way and hold from the lower end of his pants, 'paca', and this way can beat his opponent with the game called 'paca kazik'. A younger wrestler defeating an older wrestler would kiss the older wrestler's hand.

Until 1975, there was no time limit to wrestling in Kirkpinar. The pehlivans would wrestle sometimes one, sometimes two days, until they could establish superiority to one another. Wrestling games would go on from 9 am in the morning until dusk and the ones that could not beat each other would go on the next day. After 1975, wrestling was limited to 40 minutes in baspehlivan category. If there is no winner within these limits, the pehlivans wrestle for 7 minutes with scored recorded. The ones that can score points in this last part are accepted as the winners. In other categories, the wrestling time is limited to 30 minutes. If there is no winner after 7 minutes of score wrestling, then at the final stage the first pehlivan who scores a point is the winner, this is called as "golden point". In 1999 doping control was introduced during the Edirne Kirkpinar.

The final wrestling matches are held on the last day of Kirkpinar, usually the President of Turkey arrives at Edirne on this day to watch the finals. The baspehlivan's prize is given by the President, the "Ağa" (sponsor), and the mayor.

Just before the finals, the municipality organizes an auction. The bids are placed on a ram. The highest bidder becomes the "Aga" of the next year's Kirkpinar and is the number one sponsor. He welcomes his guests and puts them up at the hotel, has big dinners, and organizes festivities. Also, he hands out the medals to the winners in their categories. In Edirne he is able to stop a match, disqualify wrestlers if necessary, and even to cancel the wrestling events all together. A Turkish businessmen, Mr. Seyfettin Selim, paid 1.022.000 Turkish Lira as the highest bid (approximately 100.000 Euros with the conversion rate of that date) and one more time became the "Aga" of Kirkpinar for 2022. The "aga of all agas" means the "sultan" of the country. Presidents like Turgut Ozal, Suleyman Demirel and Abdullah Gul have been among the spectators of Kirkpinar.

Some of the great wrestlers: Kavasoglu Ibrahim the Great, Samdancibasi Kara Ibo, and Alico were head wrestlers (baspehlivan) of the Ottoman Sultan Abdulaziz. Alico established an unbreakable record of being "Baspehlivan" in Kirkpinar for 27 years. The Sultan Abdulaziz took Kavasoglu and Samdancibasi on his trip to France and England. Yusuf the Great (Koca Yusuf), Kurtdereli, Adali, Kucuk Yusuf (Huseyin) and Dobrucali Yusuf Mahmut wretled in Europe and America, and were known around the world. Another wrestler, Kara Ahmet took the world champion title in 1899 in Paris.

Why Do They Apply the Oil?

For many years the practitioners of the sport of wrestling have prepared in religious settlements. The first wrestling sketches were found in Egypt in Beni Hasan temple which was built five thousand years ago. In Central Asia, religious men called "shamans," and "dai" have been involved with wrestling. In the Ottoman Empire wrestlers were brought up in religious environments called "tekke" for seven hundred years. Just like five thousand years ago, Japanese Sumo Wrestling and Turkish Kirkpinar carries over the religious motifs of the past. Man is not simply made of matter, the other half of the human equation is our spirit and spiritual being. Wrestling without the spiritual relationship has been accepted to be harmful for the improvement of the human character. The wrestlers oiling each-other is a signification of the importance of "balance" in such competitions.

According to English thinker Bertrand Russel, the Roman Empire collapsed due to the infected mosquitoes that spread Malaria. In those times, living at sea level, to 400 meters above sea level was close to impossible. Even mosquito nets, burning animal feces, standing in smoke during sundown were not sufficient for complete protection from mosquitoes. The oil extracted from a vegetable particular to the Mediterranean region: "the olive," was used in cooking and for protection from mosquitoes. When humans learned to mix a specific ingredient "kafur" with olive oil for full protection from mosquitoes, the Roman Empire was long gone. The people of Anatolia who spent day by day applying olive oil on to their bodies, continued to wrestle with their bodies oiled, and a new style of wrestling surfaced from this condition: "oil wrestling."