As of 1st of January 2005, six zeroes have been deleted from our currency and YTL (New Turkish Lira) became the new currency unit of Turkey, so we started using the New Turkish Lira and the New Kurus (cent). The Law for YTL #5083 was published in the Official Gazette dated 31 January 2004.

While determining the name of the new currency unit, the expression of "Lira", which is the unique currency unit traditionally used throughout the Republican period after the War of Independence and identified with Turkey in international markets, has been preserved.

The facts that urged transition to a new currency unit stand as proof of the importance of the issue.

The high inflationary process, which started in 1970s, obliged expression of economic values in terms of billions, trillions and even quadrillions. In this process, the cash demand of economy was met by new banknotes in larger denominations that were put into circulation almost every two years since 1981. As a result of this process, Turkey was currently the only country where the highest denominated banknotes (20million TL banknote) were circulated. This fact was not only undermine the reputation of our currency but also adversely affected the currency's functions as a medium of exchange and store of value. Also, figures with many zeros lead to problems in accounting and statistical records, IT, payment systems and transactions at the cashiers office.

Removing six zeros from the currency coupled with the ongoing efforts to driving inflation down to single digit numbers is a very important step from the point of its effects on the reputation of the currency. Meanwhile, deleting zeros from the currency will eliminate the technical as well as operational problems arising form the use of figures with multiple zeros. Therefore monetary expressions will be simplified and taking records and making transactions will become easier. 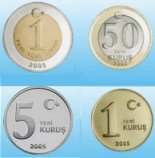 In sum, changeover to New Turkish Lira was necessary both for the prospective positive effects on the currency's reputation and for technical reasons. The New Turkish Lira is also symbol and evidence of Turkey's determination to drive down inflation.

Old banknotes and coins currently in circulation will be withdrawn as of 01.01.2006. However, for 10 years, these TL banknotes will be exchanged by the Branches of the Central Bank. Ziraat (Agriculture) Bank will carry out this task at cities where Central Bank does not have branches.

At the second stage of the operation the expression "Yeni" (New) is removed and the use of the expression "TL" is resumed as of 1st of January 2009. After this date a new paper bill of 200 TL was introduced to circulation as well.

On 1st of March 2012 the Turkish Central Bank unveiled a brand new currency sign for Turkish lira. The symbol of the Turkish currency will be a semblance of an anchor, which is a combination of Latin letters "T" and "L", crossed in the middle by two lines at an angle of 20 degrees. The anchor symbolizes the stability of the Lira, and the two lines symbolizes Turkey connecting Asia to Europe with bridges. The new sign, created by Mrs. Tulay Lale, was the winner out of 8362 entries submitted to a country-wide open contest.