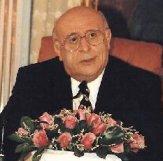 Süleyman Demirel was one of the turkish political leaders, born in 1924 in Islamköy village of Isparta, from father Yahya and mother Ummahan. He finished his middle school and high schools in Isparta and Afyonkarahisar provinces. In February 1949 he was graduated from Istanbul Technical University as an engineer. In April 1949 he started to work in the Department of Electrical Works and same year he was sent to the United States for his compulsory training, there he worked on Irrigation and Electrification projects between September 1949 and September 1950. He worked as the responsible engineer of the company who built Seyhan Damn in 1952, as the head of the Department of Damns in 1954, and as the general director of the Department of Irrigation Project (DSI) in 1955. Between 1954 and 1955 he practiced in the United States several more times. In July 1960 he left DSI and did his military service until the end of 1961. After his military service he freelanced between 1962-1964 and thought in the Middle East Technical University (ODTÜ) in Ankara for a while.

He became the leader of the Justice Party (AP) in November 1964 until October 1981, deputy prime minister in February 1965, and prime minister in October 1965. He formed the government for seven times and was the prime minister for a total of more than 10 years. His failure to halt civil anarchy in the form of student riots, leftist agitation, and political terrorism forced the resignation of his centrist government in 1971 with a military coup. He served as prime minister again between 1975-80 (until another military intervention) as a coalition government leader and once more from 1991 to 1993, at which time he became President of the Republic after the sudden death of Turgut Özal. He finished his term of seven years in presidency and retired on 16th of May 2000, after which Necdet Sezer became the next President.

Mr. Demirel was married with Mrs. Nazmiye, who passed away in May 2013. They lived in Ankara and didn't have any children. Suleyman Demirel died on 17th of June 2015 at the age of 91, during his treatment at the hospital. He's buried with a State Funeral at his home town Isparta.