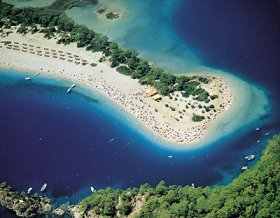 Fethiye is one of the most popular resorts along the Turkish coast. It's set on a wide bay, strewn with many islands.

Fethiye is 135 kilometers (84 miles) southwest of Marmaris in Mugla province, and has an outstanding and busy marina. The ancient name of the city was Telmessos where you can see a fortress on the hill overlooking the city which was built by Knights of Rhodes. Fethiye is known for its rock tombs carved into the faces of the cliffs by the Lycians. These are elaborately carved and are remarkable. One of them is the tomb of Amnytas dating from the 4th century BC built in Doric architectural style and is worth well visiting. Other historical places in the city are several sarcopaghi, theater and the Fethiye tower.

The Beach and the Sovalye Island are perfect destinations for those who like to enjoy the most beautiful sea. Belcegiz Bay is also good for such a visit and provides natural mountain scenery. The guest houses (pansiyon in Turkish) here will give you all the basic comfort you expect. The bay forms the dreamlike Belcegiz - Ölüdeniz (Blue Lagoon) known as "a paradise that God granted to Earth", a very fine place with 3 kilometers of natural beach and crystal blue waters in enchanting surroundings. For camping, Belcegiz Beach is ideal, and for picnicking try the Kidiril Park, for sightseeing the Gemiler Islands with their Byzantine ruins among the pine trees are recommended. At Koturumsu, a heaven-like beauty awaits you, where you may reach only by boats. There are waterfalls flowing across valleys where thousands of butterflies, exhibiting tremendous shades of colors, fly amongst the pine forest bordering of the lovely beach. Some of the other natural attractions are Katranci Bay, Günluk (Küçük Kargi) Bay, Oyuktepe, and Göcek with its harbor and marina. Lately, paragliding from Baba mountain became one of the most popular sports and it gives magnificent views for people flying over this great beach lagoon.

Around Fethiye, there are important ancient cities of the Lycians. To the southeast of Fethiye lies Xanthos at Kinik village, an important capital of Lycians. Its setting is naturally adorned while Letoon, by Kumluova village and nearby Xanthos, is also interesting. Letoon was a cult center during the Lycian period and remains of temples dedicated to Leto, Artemis and Apollo can be seen. Patara by Ovagelmis, Pinara by Minare, Tlos by Doger, Cadianda by Yesil Üzümlü, Sidyma by Dodurga, Karmilassos by Kaya, Pydnai by Kavadere, Araxa by Ören, Lydoe by Kapidag, Lissa and Arsada by Kayadibi, and Daedela by Inlice are other significant sites to visit in the environs of Fethiye. There are also many camping and picnicking facilities around the town.