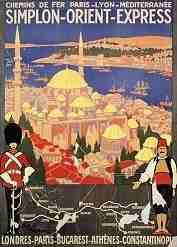 Inaugurated in 1883 by a French railway company, the Orient Express soon became the stuff legends are made of. Originally traveling from Paris through Munich, Vienna and Sophia to the Sirkeci station of Constantinople, passengers could continue the journey, traveling by boat across the Bosphorus to the Haydarpasa Railway Station to join the Taurus Express to Anatolia or even to Bagdad. But ususally many passengers decided to stay at the Pera Palas hotel for their vacation. Although the route varied throughout the years it ran from Paris to Istanbul, a distance of 3186 kilometers (1980 miles).

A monument to the hedonistic days of the late 19th and early 20th century it was the most luxurious long distance rail journey in the history of travel. Royalty, aristocracy, the rich and the famous traveled regularly on the Orient Express. Its passenger list read like a volume of "who's who". Gourmet chefs, chandeliers, fully equipped bathrooms, staterooms and dining rooms on par with the Ritz were all pan of the train. It takes on a myth-like quality in our current times of 'functional' travel.

Woven into the plot of many books, it is remembered today mainly through Agatha Christie's book (and later a film) "Murder on the Orient Express". She also spent some time at the Pera Palas hotel which today her room became the most famous and requested by almost every book appassionate visiting Istanbul.

Unfortunately in the 1990's we were more interested in the speed we can reach our destination rather than the journey itself. The days of opulent train travel are long gone but the mere mention of the name Orient Express still evoke visions of past glories.

In 1998 Orient Express re-visited Istanbul once again on a special journey organized by some travel agents who wanted to remember people its past glorious.