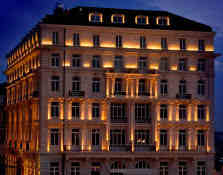 There are certain places that have a vested interest in remaining the same, disdaining unnecessary change in order to preserve the romantic nature of their past. Pera Palas Hotel in Galata district of Istanbul is such a place. Its lobbies and halls cluttered with 19th century furniture, Pera Palas has the wonderful decaying atmosphere one would expect from an Agatha Christie mystery. Christie was in fact one of the hotel's most ardent visitors (the "Agatha Christie Room", number 411, is now preserved in her honor) and it is rumored that she wrote Murder on the Orient Express here. This seems likely since the hotel was originally founded in 1892 for the specific purpose of hosting passengers arriving on the Orient Express train and no doubt served as inspiration to the Queen of Mysteries.

Another room, number 101, is notable too as it housed Mustafa Kemal Atatürk, the "Father of Turkey", while he prepared for the Turkish War of Independence. "Atatürk's Suite" is a veritable museum, displaying many of his personal effects as well as objects of interest like ebony chairs, exotic oriental carpets and a rare black silk prayer rug, all gifts from foreign heads-of-state to the revered Turkish leader.

Pera Palas' Orient Bar and charming dining rooms are considered some of the most atmospheric in Turkey. One can well imagine the spies Mata Hari and Kim Philby lounging seductively on a comfy sofa in the bar or Ernest Hemingway outlining his next novel in the dining room over Chicken Döner and Bloody Mary's with his lady of the moment. Many historically notable people have joined the ranks of these three as guests at the Pera Palas. The facts, we do have no doubt, only hint at the myriad of intrigues that occurred over the last century at this still-popular, fascinating hotel. If walls could speak...

Pera Palace Hotel was closed for restorations from the end of 2006 until September 2010, and then re-opened completely rennovated including a spa and fitness center, as well as meeting rooms.

The hotel is very close to Taksim Square and Foreign Consulates such as British, Swedish, Russian, Dutch, Italian, French, German, Greek, etc. There are also other special category and fine hotels in the neighborhood.