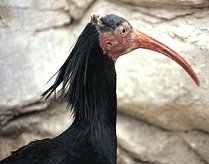 Bald Ibis, Kelaynak in Turkish or Geronticus Eremita in Latin, is also know as Northern Bald Ibis, Hermit Ibis, or Waldrapp. It is a large black bird with its featherless head and neck and a long curved red beak, living in semi-deserted or rocky habitats such as in the Middle East and north Africa. The rest of their body is covered with dark blue-purple feathers. They live in colonies nesting and mating on the steep rock cliffs to protect themselves and their eggs from wild animals and humans. They lay 2-4 eggs and eat mainly insects, lizards, snails, beetles, worms, ants, small snakes and scorpions by probing with their long beak into cracks in the soil.

Northern Bald Ibis is in the Red List of Threatened Species published by IUCN (International Union for Conservation of Nature and Natural Resources). These birds are almost being extinct as very few of them left in the world, in Turkey for example it can be seen only in the Birecik district of Sanliurfa. Besides few left in Turkey, they're also visible in Morocco and lately in Syria. Their total population is estimated to be around 530 in the wild and about 1500 in captivity, of which about 100 in Sanliurfa area. Some of the reasons for their extinction are loss of steppe or agricultural areas, dramatic changes of their habitat, massive pest poisoning in the fields, hunting, dam construction, and of course human disturbance.

Since 1989, General Directorate of Natural Parks and Nature Preserve established a special breeding station for Kelaynaks in Birecik with the help of RSPB (Royal Society for the Protection of Birds), where they successfully are trying to save and populate these birds in captivity. The birds have special nests where they mate around February-March and leave around mid-July to migrate further south to Ethiopia, Eritrea and Madagascar, than return to Birecik starting from mid-February for nesting again. In contrary of Moroccan population, Kelaynaks of Turkey are migratory. These are social birds, waking up early in the morning and flying all together to their feeding areas 10-15 kilometers away from the station. Thanks to the scientific works in the last years, 1 or 2 eggs out of 3-4 have a chance to survive today.

Since 1984, an annual festival takes place each year on 12th of April for these birds.