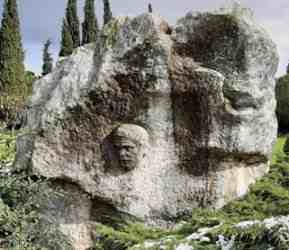 Hannibal (full name Hannibal Barca) was a Carthaginian general who commanded Carthage's forces against the Roman Empire in the 2nd century BC. He was born in 247 BC in present day northern Tunisia and died in 183 or 181 BC in Libyssa, today's Gebze town in western Turkey.

Hannibal is known as one of the best military strategists and commanders of all time, probably after Alexander the Great. Even today, military academies around the world continue to study his tactics and military strategies, especially his victory at the Battle of Cannae (in southeast Italy) which is occurred in 216 BC between the Romans and Carthage during the Second Punic War (218-204 BC). In Cannae, the Carthaginian army led by Hannibal surrounded and completely destroyed a larger Roman army thanks to his supreme military leadership. People today may recall that in the Second Punic War Hannibal made his famous military campaign in Italy by crossing the Alps with his war elephants.

After the Second Punic war, Hannibal lived in Asia Minor as a military advisor to Seleucids, but when King Antiochus III was defeated by the Romans he had to flee into Bithynia. Then Romans pressed Bithynians to turn Hannibal in, and when he heard that he was going to be betrayed he decided to commit suicide!

The exact location of Hannibal's tomb is unknown, but today there is a memorial grave dedicated to him in the town of Gebze in Kocaeli province, ancient Libyssa, where he died.