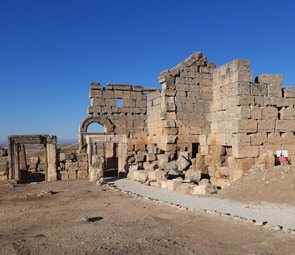 Zerzevan, also known as Samachi Castle, is one of the newest archaeological sites in southeastern part of Turkey; official excavations started in 2014 by archaeologist Dr. Aytac Coskun from Dicle University in Diyarbakir. Located in Diyarbakir's Cinar district, approximately 45 km (28 mi) from the province center, the site is located on a hilltop dominating the area.

Zerzevan was the outmost eastern border of the Roman Empire, where a large Roman garrison was controlling the strategic trade route. The region was also important for the Parths and Sasanians, another important civilization in the past. But the history of Zerzevan dates back to Assyrian period around 9th century BC. The site was located on the Royal Road of the Persians who ruled in Asia Minor between 6th and 4th centuries BC and controlled the safe passage thanks to this site.

The excavations at the site and architectural findings show us that Roman military settled here around 3rd century AD. Besides military base on the hilltop, there were also civilian settlements in the lower areas and the population altogether reached around 1200. The site was inhabited until 6th century under the Byzantine Empire, and then it was destroyed during the Arab raids in 639 AD and was never settled again, thus keeping the buildings buried in the ground and discovered today in very good conditions.

As you climb the hilltop you can notice defense walls which were 12-15 meters high and 1,2 km long, surrounding the outpost. Some of the towers are well preserved with their tunnels and stairs. As you walk at the site you'll notice small and large cisterns for water storage, water canals, ruins of a Christian church from 6th century as well as an underground church from 3rd century, stone altar, residences of Roman generals and barracks of soldiers, an arsenal, and civilian residences. There is also a necropolis just outside of the site with various types of tombs dating to 3rd-7th century AD. 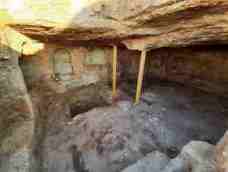 Maybe the most interesting building at Zerzevan is the Mithraeum from 2nd or 3rd century AD; a temple dedicated to the god Mithras worshiped by a mystery religion. So far this is the oldest and the easternmost temple dedicated to Mithras, therefore it's believed that this could laid the foundations of what is now Illuminati, Knights Templar, Scientology, Freemasonry and other similar groups. The temple is carved into the rock with dimensions of 7 x 5 meters and 2 meters of ceiling height.

In 2020 Zerzevan entered in UNESCO's Tentative List of World Heritage sites and attracts thousands of visitors due to its popularity of "mystery religion" of Mithras.