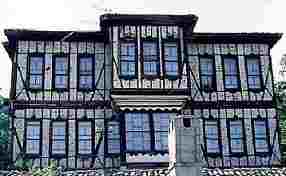 Being strong and durable, functional, economical and aesthetic are the basic characteristics of the traditional Turkish house especially from the late Ottoman period and early Republic period. The houses are built along the roads and on the edges of the squares in an order which reflects a strong respect for the neighbors. In most cases the houses on both sides of the roads, which follow the configurations of the land, are separated with high walls and have overhanging sections on these walls, reaching towards the street.

Entrance to the house is generally through an inner door which opens onto the garden. When household chores permitted, the lady of the house, whose privacy is ensured with the high walls, would go upstairs and look around and chat with neighbors from the overhanging windows of the hall which face either the street or the garden. The large windows of the upper floors protected with bars or grills allowed this outlet.

Inside, the rooms were placed around a common space called Sofa (hall), either on one or two sides or all around it. Sofas were in a sense interior court yards. It is an area which provides work space during the daily life as well as facilitating circulation among the rooms. They are opened to the outside sometimes completely on one side and sometimes on both sides.

The rooms were arranged to meet all the needs of their occupants. There, one could sit and rest, sleep, eat, worship, work and even take a bath. The recessed cupboards, open shelves, storage cupboards and places for washing lining the walls functioned as built in furniture. The divans placed in front of the windows were both seats and beds and left centers of the rooms free. The main living area of the house was the upper floor while the ground floor was allocated to service spaces.

The materials used in the houses varied according to the regions and climatic conditions. Wood and stone were used in the Black Sea Region such as in Safranbolu, while it was stone and wood according to the locale in the West and the South and combinations of mud brick and wood in the Central Anatolia and the Eastern parts of Turkey.