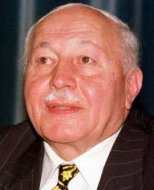 Necmettin Erbakan was one of the former prime ministers of Turkey, and also the leader of coalition government between the Welfare (Refah) Party and the True Path Party (1996-1997). He was born in Sinop province in 1926, became a professor in physics after his studies, lived in Germany for many years where he worked as a scientist. He became a minister in coalition government under Bülent Ecevit in 1974.

Erbakan was one of the founders of the Welfare Party (RP), which started to grow tremendously during those few years after it set off. In 1980 Erbakan was the leader of pro-Islamic protests, that resulted in a military coup and Erbakan's party was banned; he was closed out from politics for 7 years. It is believed that the Welfare Party's politics has less support than the 1995 elections results, which was 21%. But people cast their ballots for it, as it had a high reputation for honesty in municipal governments. Many have also supported the Welfare Party because it had a politics that promissed to help the least fortunate in the Turkish society. Erbakan raised the wages for civil servants by 50% shortly after taking office.

As prime minister Erbakan has chosen a moderate line, but still oriented himself more in direction of other Muslim states, without cutting any ties to the West, which many observers expected. In Western media, his improved relations with Iran and Libya's Ghadhafi have been hard to accept. Erbakan expressed views in the electoral campaign, which he left when he was appointed as prime minister, and he supported Turkey's application for membership in the European Union (EU).

Erbakan's Welfare Party was outlawed in 1997 after a long campaign leaded by the Turkish military forces and most of the self-conscious people afraid of a disintegration of the country with a possible Islamization, and the chances of an escalation of the conflict with Kurdish nationalists. Welfare Party (RP) changed its name into Wisdom Party (FP), with its leader Recai Kutan, but its members expressed that this was not a continuation of RP but a fresh new party.

Erbakan was banned from politics, again, for 5 years until 2003 and then found guilty by the court for some illegal money transfers within his party, so he was kept in house arrest for some time. After he was pardoned by President Abdullah Gul due to his health problems, in October 2010 he became the leader of the Saadet Party.

Necmettin Erbakan died on 27 January 2011 in Ankara and was buried in Istanbul with a huge funeral by his followers.