Kütahya is a small province in the midst of hill country in Turkey, clustering about the walls of an impressive hilltop fortress. It is the hometown of the world famous Yagcibedir Carpets, and Kutahya tiles which you can see everywhere in the country. But the best and the cheapest are in Kutahya, where you may visit the workshops of factory outlets and see these tiles produced with designs from the 16th and 17th centuries. They are especially famous for their cobalt blue on a milky white background.

The old wood and stucco houses of Kutahya are picturesque. The Hungarian House (Kossouth Museum) and those on the Germian Street are the most interesting ones. Kutahya is also a thermal springs center with locations such as Harlek - ilica, Muratdagi - Gediz, and Eynal - Simav, among the most famous. At Murat Mountain there are camping facilities including hot springs in the midst of a delightful scenery. 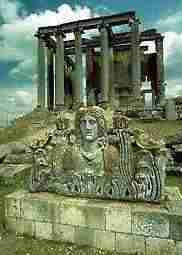 To the southwest of Kutahya an ancient city awaits you for an eccentric archaeological excursion, Cavdarhisar (ancient Aizanoi) has one of the best preserved Roman temples in Anatolia; the Temple of Zeus. Dating back to the time of Hadrian, it was built for the worship of Zeus and also the Anatolian fertility goddess Kybele. Not to miss also a beautiful Roman stadium and a theater at a short walk from this temple. A Byzantine fortress, the Seljuk Hidirlik Mosque, Balikli Bath, the Ottoman Bedesten, Saadettin Mosque, Sengul Bath are just some of the important historical Islamic remains in Kutahya. There is also a beautiful museum full of findings from Aizanoi.

In the ancient times the city was known as Kotiaeion, which, according to Strabo, meant "the city of Kotys, who was a Roman general sent to Asia Minor in the 1st century AD. Today, with the latest excavations made in and around the province, the history of the city can be traced back to the Hittite period around 13th century BC.