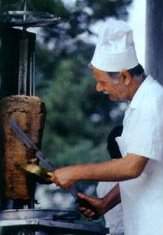 This Turkish dish is the most formidable obstacle to the victory of the hamburger in the fast food market. Doner kebab in rolls with slices of pickle and chips is the most common stand-up lunch for city office workers. The alterations of the Doner kebab are Arab shawarma and Greek gyros.

Doner kebab is a type of typical meat dish, made of meat cooked on a vertical skewer. The meat is usually prepared as a mixture of lamb and beef, but in some case it can be just beef or just chicken. The marinated meat pieces are mixed with some minced meat and they're stacked on a tall vertical spit which is turning slowly next to a vertical wood or coal fire. As it gets grilled, the cooked outer part of the cone of meat is shaved in thin slices by a huge sword-like knife, and arranged on a plate with Ace or flat pide (pitta) bread. It can be served plain as is on a plate, or put on white rice, or rolled in a regular bread or lavash wrap.

Another plate made with Doner kebab is the Iskender Kebab. It's said that Iskender bey from Bursa invented this plate so he gave his name to it. Pieces of pita bread are put on a large elliptical plate, then thin slices of doner are placed on it, a special tomato sauce is poured on top and served with yoghurt on the side of the plate. They also pour melted butter on the plate, so it becomes a delicious dish.

A local variation of Doner Kebap would be Cag Kebabi from Erzurum. It is made with slices of lamb threaded on a spit, with 10 percent minced beef mixed with milk, chopped onion, black pepper and flaked chili pepper spread between each slice to hold them together. The surface is covered tightly with wood ash, and then the kebab is roasted horizontally over a wood fire. As the outer surface browns, the cook takes a metal skewer and threads it through the cooked surface, slices off the portion with a long döner knife, and serves it with thin lavash bread.