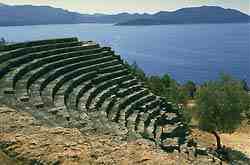 Kas was originally called Habesos or Habesa in the ancient language of Lycia, and later was given the name of Antiphellos. Phellos was the name of the city across Kas and was a Greek word meaning "stony place", and this name is very well suited to the area. So, because Kas was built just across Phellos, the citizens called their town as Antiphellos (across Phellos).

Antiphellos, which once was a member of the Lycian League, is known to have gained reputation and importance as a port town during the Hellenistic period around 4th century BC, sustaining its significance as one of the leading towns during the Roman period as well. During the Byzantine era, Kas was a bishop's see. Today, there are several Lycian sarcophagi around and a well preserved ancient theater in the town.

Kas is located about 170 kilometers (106 miles) to the west of Antalya, in the Mediterranean region south of Turkey. It's a small and charming coastal resort where many sailing boats anchor in its small marina. The Lycian style sarcophagus at the beginning of the street running down to the port is almost the symbol of this lovely town.

There are small and medium size hotels at Kas, some of them are in the town center and some are on a small peninsula called Cukurbag. Most of the visitors come to Kas for two reasons: to scuba dive or to visit the ancient sites nearby such as Aperlai, Isinda, Apollonia, Kekova etc. Kalkan town is also located near Kas, and there is a small sandy beach between these two (Kaputas beach). Besides excellent diving locations here, for sports and outdoor lovers there are also possibilities for trekking, sailing, and paragliding.

Just 2 kilometers (1,2 mile) offshore from Kas there is the Greek island Kastelorizo (Meis in Turkish), it's possible to rent a boat to get there.