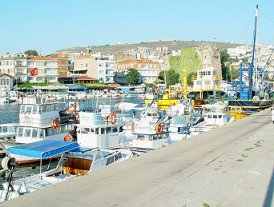 Sinop is one of the most beautiful natural harbors on the Black Sea coast. There are many legends about the foundation of the city but the most dependable is that the Miletion colonists founded it in the 7th century BC and the city is the birthplace of the cynic philosopher Diogenes. According to another legend the province is said to have received its name from the Amazon Queen "Sinova". The town's citadel dates from that early age and the foundations of the Temple of Serapis is to be found on the grounds of the Archaeological Museum where some beautiful golden icons are displayed. The 13th century Alaeddin Mosque, the Alaiye Medresse, and the Balatlar Church are of interest in the city.

Traditional nautical wood carvings, good crystal and the original cotton clothes of the city are praiseworthy and unique, so you will want to have examples of these artifacts. The seaside hotels and small holiday villages will make you stay longer and you will have the opportunity to sit in a fish restaurant by the harbor and watch the perfect combination of green and light blue while sipping your wine and tasting some traditional Turkish food. Hamsilos Fjord, 11 kilometers (7 miles) from the city center is the only fjord in the country.

Gerze, situated on a peninsula, 40 kilometers (25 miles) southeast of Sinop, will provide you with fine beaches, meadows, restaurants and parks, while Camgölü provides camping facilities in a large forest sloping to the sea. At Boyabat, the largest town of the province, there are many rock tombs and a citadel.