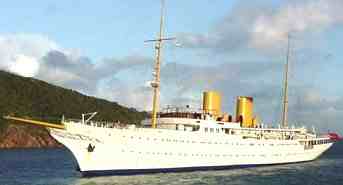 The Savarona is one of the largest private yachts in the world. She was built in March 1931 in Hamburg for an American wealthy lady, Mrs. Emily Roebling, grand daughter of the engineer who built the Brooklyn Bridge, spending about 4 million US dollars. The name of the boat comes from an African swan living in the Indian Ocean area. In March 1938, the yacht was sold for 1.2 million US dollars to the Turkish Government to be used as a presidential yacht. Ataturk loved this yacht very much but unfortunately he could enjoy her only for six weeks before his death on November 10th of the same year.

The Savarona stayed moored at Kanlica bay on the Bosphorus until 1951, then became a training ship for young officers of the Turkish Navy. She was badly damaged by a fire in October 1979 off Heybeli Island and not used until 1989, when she was leased from the Government by a business man, Mr. Kahraman Sadikoglu, who renovated and refurbished the yacht completely in 3 years spending about 45 million US dollars; steam turbines were removed and a modern diesel propulsion system was installed, interior was styled by a famous designer, tons of fine marble was used, and so on. After her restoration, Savarona started her glorious days again and since then she has been chartered around the waters of the world for the jet-set and high society people. She was refitted in 1999 to meet latest international and luxury standards. In 2013 the lease contract between both parties was canceled due some problems, thus the yacht passed to the Government again.

The yacht is 136 meters long (446 feet), 16 meters (52 feet) of beam, 6 meters (20 feet) of draft. She has two powerful diesel engines (2 x 3,600 hp) and can travel at 15 knots of cruising speed (maximum speed 18 knots). There are between 40-45 crew members on board. The yacht is usually docked in Kurucesme - Istanbul during winter months, then in the summer she sails the Mediterranean.