Located 20 kilometers (12 miles) from the town of Denizli in the Aegean region of Turkey, Pamukkale is one of the most interesting places in the world, justly famous not only for the entrancing beauty of its unique geological formations but also for its historical remains. The calcium oxide-rich waters flowing down the southern slope of Caldag located north of the ruins have, over the millennia, built up deposits of white travertine on the plateau thus fully justifying both the site's ancient name of Hierapolis (meaning Holy City in Greek) and its modern one of Pamukkale (meaning Cotton Castle in Turkish).

Ancient Hierapolis appears to have been founded by King Eumenes II of Pergamon and its name is derived from Hiera, the wife of King Telephos, the legendary founder of Pergamon. Another meaning of the city could be Holy City (Hieros = Holy in Greek). The city became subject to Rome in 133 BC. In 17 BC during the reign of Tiberius it suffered a heavy earthquake that substantially destroyed the city, requiring it to be rebuilt. Preliminary excavations at Hierapolis were undertaken by a German team towards the end of the 19th century. Since 1957, excavation and restoration work has been going on under the direction of an Italian group of archaeologists from the University of Lecce, sponsored by Fiat.

The ancient city was strung out on either side of a long colonnaded street called the Plateia. Measuring 13 meters (43 feet) in width, this street ran north and south from the southern gateway to the Arch of Domitian in the north. It is paved with huge blocks of limestone. The first structure one encounters on reaching the plateau is the city baths, which are in a very good state of preservation. The baths are Roman and from the 2nd century AD. In the eastern part of the baths is a palaestra measuring 36.13 meters by 52.25 meters. Immediately to the north and south of the palaestra are two big rooms that were reserved for the emperor and ceremonial use. A large hall stretches the length of the western side of the palaestra and this was the gymnasium used by athletes. This hall led into the frigidarium from which one proceeded to the barrel-vaulted rooms of the caldarium. A small room adjacent to the large hall now serves as a museum in which works discovered in the Hierapolis excavations are on display. Since Hierapolis was principally a luxury resort town it was richly adorned with magnificent sculptures showing the influence of the Aphrodisias school and is well worth a visit. 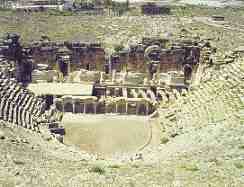 The well preserved theater of Hierapolis commands magnificent view of the plain below. The original theater was located above the northern gate, but when the city was rebuilt during the reign of the Flavian emperors (60 AD) the theater was relocated here, and the seats from the old structure were used in the work. During the reign of Septimius Severus (193-211 AD) the theater's skenea was modified and richly decorated with relief. In 532 it was discovered that the skenea had been weakened by age and the almost daily seismic activity that takes place here and had to be reinforced. Since the theater has been restored, it is now possible to see the friezes of mythological scenes depicting Apollo and Artemis in their original positions. Thirty rows of the seats of this theater resting against the slope have survived. Originally there were 20 rows in the lower part and 25 in the upper separated by a diazoma. The cavea was divided by eight aisles. Passing through the city walls above the theater you can see the Martyrion of Saint Philip. This is an octagonal building erected on a square measuring 20 by 20 meters. It was built in the early 5th century. Even in its present state of ruin it is an impressive structure.

Near the road, below the theater, is the Temple of Apollo, the principal deity of the city. While the foundations of this temple go back to late Hellenistic times, the present remains of the upper structure are from the 3rd century AD. Next to it there is a cave called the "Plutonion" from which poisonous gases emerge. According to Strabo, an ox thrust into this cave would keel over and die. He himself experimented with doves. The temple measures 20 by 15 meters and sit on a platform high 2.5 meters. Before the temple there is a monumental fountain. Built during the late 3rd century AD, the walls of this rectangular fountain are very well preserved. There was also a pool located before the fountain and the structure was richly adorned with statues and columns. The water for this fountain was brought here by aqueducts, remains of which may be seen in the vicinity of Güzelpinar and between Pamukkale and Karahayit.

East of the present museum is a Christian basilica consisting of a nave and two aisles. It dates from the 6th century AD. Walking along the route of the Plateia (which now passes through the ancient swimming pool) reminds us that this main street dividing the ancient city was once decorated with colonnades, porticos, and important buildings located on either side. The street runs directly toward the city walls passing through a gateway built in Byzantine times atop an earlier fountain. On the way is a basilical structure with two aisles and a nave whose eastern end terminates in an apse. The city walls were built in 396 AD. and were reinforced by 28 towers. Passing through Byzantine gate you come to a rather well preserved section of the Plateia. This part was built during the reign of Domitian (81-96 AD) and terminates with the Arch of Domitian. This monumental gateway was actually erected by Julius Frontinus, who was proconsul of the Roman province of Asia (middle western Anatolia) in 82 and 83 AD, and dedicated to the emperor. The gate has two round towers and three portals. Excavations are now in progress to reveal the remains of shops and houses that once lined both sides of this street.

Northeast of the street between the Byzantine and Domitian gates was the agora (market) of ancient Hierapolis. The traces of the city's original theater may be seen above. If you follow the road in the direction of the necropolis you pass by the imposing walls of a building originally erected as baths around the end of the 2nd century AD. It was converted into a church in the 5th century. The huge necropolis of Hierapolis, largest ancient graveyard in Anatolia with more than 1200 tombs, spreads out on either side of the road for a distance of two kilometers. It contains tumuli, sarcophagi, and house-shaped tombs that range from the late Hellenistic period to early Christian times. It is one of the most extensive and best preserved ancient cemeteries in Anatolia. The road proceeds on to the hot springs of Karahayit located 4 kilometers (2,5 miles) away.

There are several thermal resorts in the area and tours visiting Pamukkale can be arranged from Izmir.

Besides Hierapolis, other important archaeological sites nearby that one shouldn't miss are Laodicea and Colossae.