Osman Hamdi Bey was one of the most talented Ottoman intellectuals during the Tanzimat period. He was an archaeologist, museum curator, painter, and first head of municipality of Kadikoy district in Istanbul. He was the son of a grand vizier, Ibrahim Ethem Pasha, and born in 1842 in Istanbul. He studied Law in Paris in 1960's, where he also had a chance to work with local painters hence became a painter himself. He returned to Istanbul in 1871 and worked for the Palace. In 1883 he laid the foundations of Fine Arts faculty and also the Archaeological museum of Istanbul. Osman Hamdi Bey excavated in many ancient sites such as Nemrut mountain, the site of Lagina, and Sidon in Lebanon where he discovered great artifacts including an intact sarcophagus which is called as Alexander's and is on display at the Archaeological museum in Istanbul. Osman Hamdi died in February 1910. 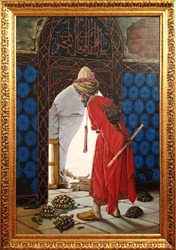 This is the most famous paint of Osman Hamdi Bey. He made it with oil paint on canvas of 221.5 x 120 cm in 1906. The story is about a turtle trainer, which he put himself there in a traditional Dervish costume, looking after the turtles and feeding them with leaves. During the Lale period in the beginning of 18th century candles were put on turtles to illuminate the gardens during night time events.

The location of the "training" can be identified as Yesil Cami, Green Mosque, in the city of Bursa. Probably Osman Hamdi started to paint here and then completed the work in his studio in Istanbul. Three turtles are eating the leaves meanwhile other two behind are approaching to the meal, and the trainer is supervising them.

The Tortoise Trainer, along with many other important paintings, was owned by a rich businessman, Mr Saim Saim Birkok, until his death in 1961, after which a long and annoying inheritance dispute started between family members therefore all his paintings were trusted to the Paintings and Statues museum in Istanbul. In 1990 Osman Hamdi's the Tortoise Trainer painting was sold in an auction to another rich businessman, Mr. Erol Aksoy, for USD 750.000. But when Mr. Aksoy's bank and all assets were seized by the TMSF (Savings Deposit Insurance Fund) due to his extreme debts, also the Tortoise Trainer passed to the State and then in December 2004 sold by auction to Pera Museum owned by Suna Kirac - Inan Kirac Foundation at a record price of 5 trillion old Turkish Liras (today's 5 million TL), which was equivalent of USD 3,5 million at that time, hence making it the most expensive Turkish painting of all times.

Today, the Tortoise Trainer painting of Osman Hamdi Bey is on display at the Pera Museum located in Beyoglu district.