It is said that the name of the city is a united name which comes from the name of "Kirik" village where is settled to the 3 kilometers north of city from center of city and the name of "Kale" (hill) which is present in the center today. It is known that between 16th and 17th centuries, Turkish tribes and communities who were coming from East of Turkey are settled in Anatolia, especially in Central Anatolia. One of these tribes which is named as "Oguz-Oguzhan" clan is settled in "Kirikkal'a" (oldest name of the city) which is near to Ankara mentioned in the history archives of Turkey. 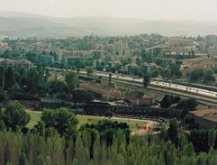 Kirikkale is a recent province of Turkey in Central Anatolian region nearby Red River (Kizilirmak), about 80 kilometers (50 miles) east of Ankara. It became a city in 1989 under the presidency of Turgut Ozal. As of 2016, the population is approximately 270.000, but it's hard to imagine that in 1925 Kirikkale was a small village consisting of 12 houses only. It is expanding rapidly to become an industrial center. Main industries in Kirikkale include state-owned military arms and ammunition factories (MKE) and chemical plants. The economy is almost exclusively based on its steel mills producing high quality alloy steel and machinery. Although Kirikkale is rich in respect of different types of ores, unfortunately is quite poor in respect of its reserves.

There is also a significant timber industry thanks to the forests with oak trees surrounding the city but most of the land is covered with "steppe". There are several vineyards as well. Sesame, clove, daisy, mint mustard and thyme can be told for the samples of some plants which grows spontaneously in the region. Kirikkale serves also as a local market for cereals and livestock in Anatolia.

Kirikkale city takes its part in a mild-climate zone. However climate changes to continental-climate zone because of the daily temperature changes which is a result of far distance from seas. Summer is usually hot and arid while winter is cold. There are no natural lakes in Kirikkale.

The average altitude of the city is 700 meters (2300 feet) above sea-level. Different plateaus can be found in Kirikkale and their heights can change between 1200-1600 meters. Its location is on the crossroads of a major highway running to the east and to the Black Sea region. Also a railway station on a major rail route to eastern Turkey makes this city important.

Kirikkale University was founded in 1992 as the highest educational institution in the province.

The province stands on the earthquake zone where seismic activities can be seen sometimes and once volcanic actions were seen.