Situated on the banks of Tigris (Dicle) river in South-Eastern Anatolia, Diyarbakir still carries a medieval air with its walls encircling the city. 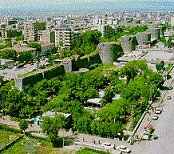 Starting from the earliest times, the city was ruled by the Hurri-Mithani, Hittites and Assyrians. It was once the capital city of the Arami Bit-Zamani Kingdom. It was later occupied or ruled by the Medians, Persians, Macedonians, Seleukos, Romans, the Ilkhanide and the Akkoyunlu Seljuks. It is referred to as Amidi, Amid, Amido or Amida in different sources. In Islamic - Arabic sources it is cited as "Diyar-i Berk". In the Republican era it is started to be known as Diyarbakir deriving from the copper ore existing in the area.

These black basalt walls are perfect examples of the military architecture of the Middle Ages. They are also very well known since they are one of the largest (5.5 kilometers / 3.4 miles) and best preserved walls in the world after the famous Great Wall of China. Although there were Roman, and probably earlier walls here, the present walls date back to early Byzantine times. There are sixteen keeps and five gates, each of which deserves seeing along with their inscriptions and relief. There are four main gates along the wall called as Dag Kapi, Urfa Kapi, Mardin Kapi and Yeni Kapi, and they open to four different directions. The walls are 12 meters (39 feet) high, 3-5 meters (10-16 feet) wide and have 82 watchtowers. In July 2015 the city walls and Hevsel Gardens entered into the UNESCO World Heritage List.

The most famous structure which witness to the rich historical heritage of Diyarbakir is its fortress. This fortress located on a solid rock called "Fis" 100 meters (328 feet) high from the Tigris river is believed to be built by the Hurri. The citadel has a domed basilica (a Nasturian Church from the 6th century), a mosque, Sahabeler tomb, an Artuklu Palace and some old official buildings.

Deliler Han (Inn) by the Mardin Kapi of the City Walls was built by Husrev Pasha in 1527 and also known by his name. Now it is restored as a small hotel preserving the original air of the old days when caravan travelers on the silk road used to stop and rest in this caravanserai. It is a two part structure, a two storey main part and a stable. In the old days guides who took pilgrims from various locations to Mecca each year used to gather here. The remains existing just across the inn are also attributed to pilgrims. 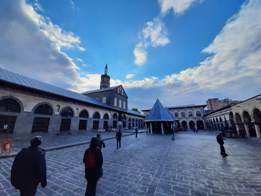 Ulu Mosque is notable for its original architecture and the ancient materials used in the restoration of the building at various times. It is one of the oldest mosques in Turkey. It is known that the Church of Saint Thomas was gradually converted into a mosque. It is a grand and impressive structure, built of cut stone over an area of 80 x 80 meters (262 x 262 feet). The minaret behind the mosque is rectangular. Its fountain (1849), carved marbles and niche are all important artworks. The walls of the mosque are also ornamented with relieves and carvings. The minaret and the gate bear 20 inscriptions dating back to various periods in history. The tombs in the courtyard was destroyed by the Persian King Ismail in 1507.

Nearby the Ulu Mosque is the Mesudiye Medrese and Hasan Pasha Han, a caravanserai now being used by carpet and souvenir shops and cafeterias. The Nebii Mosque is a typical example of the Ottoman style. The Church of the Virgin Mary is interesting and it is still in use. The Kasim Padisah Mosque is also interesting, especially due to the engineering which built a large tower upon four tiny pillars about two meters (6.5 ft) high, called the Dört Ayakli Minare (minaret).

The house where Cahit Sitki Taranci, one of the most celebrated poets of the Republican period, was born was turned into a museum in 1973. The museum exhibits the photographs and personal articles of the poet as well as some ethnographic pieces obtained from the area. The house bears the characteristic features of local architecture. Gazi Kosku is a nice site for picnicking. The town of Cermik is a spa center. One should definately see also the Malabadi bridge, a 12th-century stone bridge in Silvan district, approximately 100 km (62 miles) from Diyarbakir.

The city holds many mosques and buildings of long historical and archaeological importance. There are several museums in the city center. When you add to those the renowned watermelons of about 40 kilograms (85 lb) approximately, and its silver and copper artifacts, Diyarbakir certainly stands as a destination to be visited in Anatolia.

The mythological cave Eshab-ul Keyf and Dacianus ruins are located in the town of Lice. The holy Mount Zulkufil and Hilar Caves are located in the town of Ergani. Within the environs of Diyarbakir are the Birkleyn and Hasun Caves, the Antak City ruins and the Cayonu Archaeological Site. Another holly site for the Muslims near Diyarbakir city is the Prophets' Tombs at Egil, where 2 of the prophets mentioned in the Koran are burried: Hz. Elyesa (Elisha) and Hz. Zulkifl (Dhu al-Kifl). At Egil you can also visit the Assyrian fortress with breathtaking views and take a boat trip in the dam lake to see their monumental tombs.

Zerzevan castle is one of the newest and a very interesting archaeological site located at Cinar district. It was the easternmost border of the Romans where a large garrison was stationed.

Diyarbakir is located on a transition zone connecting the mountainous northern areas and the plains of Mesopotamia. It is presently at the center of the highway network connecting other important settlements of the region such as Elazig, Mardin, Sanliurfa and Bitlis. The railway reached the province in 1935 and was later extended to Kurtalan out of the territory of the province. Diyarbakir has air connections to the big city centers of Turkey such as Istanbul and Ankara.

The province has a territory of 15,355 square kilometers. The population is approximately 1,7 million (2019), living in 13 districts (including the central town) and many villages. Its administrative districts are Bismil, Cermik, Cinar, Cungus, Dicle, Ecil, Ergani, Hani, Hazro, Kocakoy, Kulp, Lice and Silvan. Dry farming and fallow are practiced over most of its culture land. Despite its present status of dependency on crop farming and stock breeding, Diyarbakir has a considerable potential for other investment ventures and presently it is the second industrial centre of the region after Gaziantep. Diyarbakir is one of the provinces accorded priority in development. The province is now moving to concentrate on food and meat production, which increased capacity for marketing, while maintaining its traditional branches of industry.

Jewelry, silk processing, coppersmith works, pottery, leather works, felt making, textiles, embroidery and carpet making are the leading handicrafts in Diyarbakir. Among them, jewelry is still important. Mat bracelets, coriander, necklaces and silver ornamented wooden shoes are the special works of the province. Sericulture is practiced at the city center and in the districts of Kulp, Silvan and Lice. However, silk production is in decline. Textiles which lived its golden age in the 40's now survive only in small workshops.