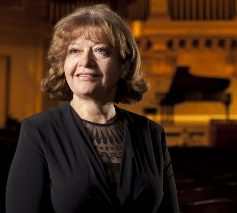 Idil Biret is a world-renowned Turkish pianist. She was born on 21st of November 1941 in Ankara. She showed her interest in music at the age of two, and at the age of four she started to play Bach! In 1948, when she was 7 years old, President Ismet Inonu enacted a special law from the Parliament to grant state scholarship for bright and gifted students like Biret, and then together with her parents she was sent to study in Paris, at Paris National Conservatory. Biret was thought by the best pianists here and she gave concerts at Paris Radio and at Champs-Elysees Theater. She was graduated with three best degrees on piano and chamber music at the age of fifteen.

Idil Biret performed on many stages around the world starting from 16-years of age, such as in USA, Russia, Canada, Germany, France, Greece and Turkey, playing with Boston Symphony, Orchestre National de France, Orchestre Suisse Romande, London Symphony and London Philharmonic, Leningrad Philharmonic, Leipzig Gewandhaus, Dresden Staatcapelle, Tokyo Philharmonic, Sydney Symphony and Turkish Presidency Symphony orchestras. She was honored with many awards and prizes, such as Lili-Boulanger Memorial (Boston), Harriet Cohen / Dinu Lipatti gold medal (London), Adelaide Ristori Prize (Italy), Artistic Cultural Merit and Distinguished Service Order (Poland), Chevalier de l'Ordre National de Merite (France). In 1971 Biret is announced as State Artist by the Ministry of Culture in Turkey contributions into the Turkish culture. She has been a jury member at several piano competitions around the world and she has more than 100 recordings and CD's.