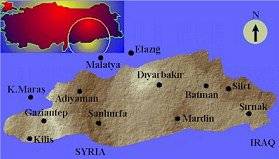 GAP (South Eastern Anatolian Project) is a multi-sectoral and integrated regional development project based on the concept of sustainable development. Its basic aim is to eliminate regional development disparities by raising people's income level and living standards; and to contribute to such national development targets as social stability and economic growth by enhancing the productive and employment generating capacity of the rural sector. The project area covers 75,000 square kilometers (29,000 square miles) and 9 provinces in the Euphrates - Tigris river basins and Upper Mesopotamia plains: Adiyaman, Batman, Diyarbakir, Gaziantep, Kilis, Mardin, Siirt, Sanliurfa and Sirnak. The GAP region has a share of about 11% in the total population (around 8,4 million) and 10% in geographical area of Turkey. Around 20% of total irrigable land in the country is in this region and the region represents 28% of Turkey's total hydraulic potential.

The original initiative in 1960's and 70's consisted of irrigation and hydroelectric energy production projects on the Euphrates (Firat) and the Tigris (Dicle) rivers. Along the 80's, the project was transformed into a multi-sectoral regional development program of a socio-economic character. This program covers such sectors as irrigation, hydraulic energy production, agriculture, urban and rural infrastructure, forestry, education and health. Its water resources program envisages the construction of 22 dams and 19 power plants and irrigation schemes on an area extending over 1.7 million hectares. The total cost of the project is estimated around 32 billion US Dollars. As of the end of 2015, 19 dams are built and 13 hydroelectric plants are operational, with a total installed capacity of 5534 MW (target is 7490 MW) and the yearly production is 21 billion kWh, which is equivalent to approximately 1.3 billion USD per year in monetary terms.

The project is based upon the concept of sustainable development which aims at generating an environment in which future generations can fully develop themselves and reap the benefits of development. Equitable development, participation, protection of the environment, employment generation, spatial planning and infrastructure development are the basic strategies of GAP.

The center-piece of the Southeast Development Project (known in Turkish as GAP) is the 84.4 million cubic meters (3,000 million cubic feet) rock and earth-fill Ataturk Dam, the third largest of its type in the world. Other dams and power plants are now in various stages of construction or planning in the southeast area. Such massive state investment is followed by the private sector investments to tie this forgotten part of the country into the national economy at last. In 1997, irrigation of Harran fields started and farmers now are harvesting their crops, especially superb quality Turkish cotton which is considered as the second best in the world (after the Egyptian cotton). When the projects are completed, 1.8 million hectares of land will be effectively irrigated.

The basic development scenario envisaged in the GAP Master Plan is to transform the region into an "agriculture based export center". And it will for sure change the Flora in the region in a positive direction. It also improved the living standards of the people in the area. So far there are highways and double-lane roads built; 6 major airports in Sanliurfa, Diyarbakir, Mardin, Gaziantep, Batman, and Sirnak are functional; There are 2 free zones (Mardin and Gaziantep); From 96 hospitals with 9.980 beds in 2007 the region came up to 128 hospitals with 17.492 beds as of 2015; 6 new universities in 9 provinces are opened since 2006.

Change in socio-economic structure of the region

Taking 2005 as the target year, the Master Plan projected GRP with its components of Agriculture, Industry, Services and the change with respect to 1985 was envisaged as follows:

As of now the Gap Action Plan for 2014-2018 is functional, which aims to more growth in the area.