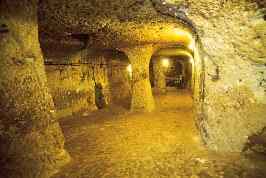 The underground cities of Cappadocia are worthy of a visit when you come to Nevsehir province. Derinkuyu is the largest one so far. The one time home of up to 20,000 people, its 8 levels descend into the Anatolian plateau 50 km south of Göreme. A large, market town sized community was digging a settlement out to guarantee themselves a degree of protection against the invadors.

There are 8 floors of tunnels but today only 4 of them are open to the visitors and this is enough to give you an idea of the sensation of living in a labyrinth like this. The ventilation shafts, circular and descending from the surface to the lower levels, bring home the scale of the enterprise while the massive circular doors - which were rolled across the passages and sealed from the inside - remind you of the motivation for moving underground in the first place.

Derinkuyu is by no means the only such city you can visit here. There are actually 40 or so subterranean settlements in the area although only a few are open to the public. For example Kaymakli, 10 kilometers to the north of Derinkuyu, is smaller and less excavated but 4 levels are accessible and the experience is pretty much the same. Not For The claustrophobic. Some other underground cities that can be visited in Cappadocia are Acigol (Tatlarin), Ozkonak, Mazi, Ozluce, Sivasa, Cardak, and Seratli.