Preparation for the conquest of Istanbul started only one year ahead. Huge canons that were necessary for the siege were molded. In 1452, Rumeli Castle on the European side was constructed to control the Bosphorus. A mighty fleet of 16 galleys was formed. The number of soldiers were doubled. The supply routes to Byzantine were taken under control. An agreement was made with Genoese to keep Galata impartial during the war. In April 1453, the first Ottoman frontier forces were seen in front of Istanbul. The siege was starting. The important points of the conquest are chronologically listed below.

6 April 1453
Sultan Mehmed pitched his imperial tent by the door of St. Romanus in Topkapi. The same day the city was besieged from the Golden Horn to the Marmara Sea from the land.

6-7 April 1453
First cannons fired. Some of the fortresses in Edirnekapi were destroyed.

9-10 April 1453
Some of the fortresses on Bosphorus were taken. Baltaoglu Süleyman Bey seized the Marmara Islands.

11 April 1453
The big fortresses were bombarded by cannon fires. Holes and cracks were opened here and there. Serious destruction inflicted by ceaseless bombardment.

12 April 1453
The Ottoman fleet attacked the ships protecting the Golden Horn. The victory of the Christian ships decreased the morale of the Ottoman army. At the order of Sultan Mehmed, the Byzantine ships were pounded by mortar fire, and one galley was sunk.

18 April 1453, Night
The Sultan gave his first crucial order. The attack lasted four hours but it was scattered.

20 April 1453
A naval skirmish took place close to Yenikapi between the Ottoman fleet and four Byzantine warships with three supply ships full of food and weapons sent by the Papacy. The Sultan came to the shore himself and ordered Baltaoglu Süleyman Pasha to sink those ships by any means possible. The Ottoman fleet could not stop enemy's ships which were bigger. With this failure the Ottoman army lost its morale and showed the signs of defeat. Ottoman soldiers started defecting from the army. Soon, the Byzantine Emperor wanted to take advantage of this situation and offered peace. The offer, supported by famous Vizier Candarli Halil Pasha, was rejected by Sultan Mehmed. The siege and bombardment of the fortresses with cannons continued. During this chaos and widespread feeling of defeat, a letter from the Sultan's spiritual teacher Aksemseddin promised good news about the conquest. Encouraged by this spiritual support, Fatih Sultan Mehmed, escalated the attack, and decided to add an element of surprise: the Ottoman fleet anchored in Dolmabahce would be moved to the Golden Horn gulf by land.

22 April 1453
In early hours of the morning, Byzantine Christians were dumbfounded and horrified when they saw Ottoman galleys moving down on the hills ol the bay. Seventy ships carried by cows and balanced by hundreds of soldiers via ropes were slid over slipways. By afternoon the ships were inside the well protected bay. The surprise appearance of the Ottoman fleet in the bay created panic among Byzantine residents of Constantinople. The fortresses on the shore of Golden Horn became a vulnerable spot and some of the Byzantine forces were moved there. This weakened the defense of the land fortresses.

28 April 1453
The attempt to burn the Ottoman ships in the bay was prevented by heavy cannon fire. A bridge was constructed between Ayvansaray and Sutluce to attack the fortresses located on the shore of the bay. An offer of unconditional surrender was delivered to the Emperor through the Genoese. If he surrendered he could have gone wherever he wanted and the life and property of his people would have been spared. The Emperor rejected this offer.

7 May 1453
A three hour long attack was launched on the stream of Bayrampasa with a 30,000 strong force; but it was failed.

12 May 1453
A thunderous attack made towards the point between Tekfursaray and Edirnekapi was defeated by the Byzantine defence.

16 May 1453
When the underground tunnel dug in the direction of Egrikapi intersected the Byzantinian underground tunnel, an underground skirmish erupted. The same day, an attempt to cut the sturdy chain blocking the entrance of the bay failed. The following day the attack was repeated, but again ended with failure.

18 May 1453
Ottoman forces launched another attack from the direction of Topkapi by using a wooden mobile tower. The Byzantine burned the tower at night and emptied the trenches that were filled by Ottomans. Over the following days, bombarding of the land fortresses was continued.

25 May 1453
Fatih Sultan Mehmed, sent Isfendiyar Beyoglu Ismail Bey as an ambassador offering him to surrender for the last time. According to this offer, the Emperor and his followers could take their wealth and go anywhere they wished. The people who decided to stay could keep their belongings and estates. This offer too was rejected.

26 May 1453
According to rumors European countries and especially Hungarians were planning to mobilize their troops to help the Byzantines unless the siege was ended. Upon hearing these rumors Sultan Mehmed gathered his war council. In the meeting Candarli Halil Pasha and his party defended their previous position, that is, of putting an end to the siege. Sultan Mehmed with his tutor Zaganos Pasha, his teachers Aksemseddin, Molla Gurani and Molla Hüsrev opposed the idea of quitting. They decided to continue the war and Zaganos Pasha was commissioned for preparations.

27 May 1453
The general attack was announced to the Ottoman army.

28 May 1453
The army spent the day by resting and preparing for the next day's attack. There was a complete silence among soldiers. Sultan Mehmed inspected the army and encouraged them for the great attack. On the other side, a religious ceremony was held in Hagia Sophia Church. The Emperor urged people to participate in the defense. This would be the last Byzantine ceremony.

29 May 1453
Platoons positioned for the assault. Sultan Mehmed gave the order to attack at midnight. Inside Constantinople, while the soldiers positioned for war, people filled the churches. The Ottoman army launched its final assault accompanied by commemoration of God and beats of drums. The first assault was performed by infantry and it was followed by Anatolian soldiers. When 300 Anatolian soldiers were martyred, the Janissaries started their attack. With the presence of Sultan Mehmed, the Ottoman army was motivated and chest to chest fights started. Meanwhile the young soldier called Ulubatli Hasan who first erected the Ottoman flag on Byzantine land fortresses was martyred. Upon the entrance of the Janissaries from Belgradkapi and the surrender of the last defenders in Edirnekapi front, the Byzantine defense collapsed. Abandoned by his soldiers, the Emperor was killed during street skirmishes. Turkish forces entered from every direction and crushed the Byzantine forces completely. Towards noon Sultan Mehmed entered the city. He went directly to Haghia Sophia Church and ordered to convert it into a mosque.

Consequences of the Conquest 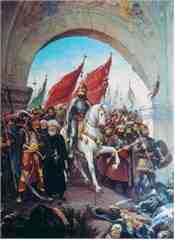 The conquest of Istanbul has had such a historical impact on the Turkish and Muslim world to the degree that some historians demarcate the end of the Middle Ages with the city's conquest. With the siege of Istanbul, the Ottomans proceeded to establish hegemony over numerous independent Turkish states (Beylik) within Anatolia. The result of imperial conquest was to unify the Turkish populations in Anatolia. In turn, other non-Turkish, Muslim communities and principalities were brought together under the aegis of Ottoman leadership so that the Ottoman Beylik would eventually expand into an Empire.

After the conquest, Ottoman Muslims were to take dynamic roles in shaping international politics. Up until that point European Christendom had, for three centuries, striven to evict Muslims from Asia Minor, with Istanbul functioning as a border station for the Crusaders. After the conquest, however, the sovereignty of Asia Minor Muslims was assured, and they were no longer threatened by the Crusaders. Indeed Muslims would eventually begin European campaigns, so that the conquest of Istanbul became a historic turning point vis-a-vis proving superiority over Europe.

A second critical component in Istanbul's significance to world events and history is its relationship to the Renaissance. After its conquest, many Byzantine artists and philosophers emigrated to European centers, mostly Rome, taking with them valuable manuscripts regarding advanced intellectual developments. These intelligentsia were instrumental in the movement to revive and revise classical Greek culture. The clash and reunification of the two divergent schools sparked the ideological revolution known as the European Renaissance, and Byzantine intellectuals from Istanbul were pivotal agents in catalyzing the movement.