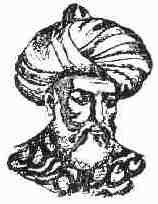 Known to the Turks as Barbaros Hayreddin, he was the greatest, most greatly feared, and most successful of all the Ottoman Naval warriors. He was born in 1475 in Mytilene - Lesbos, one of the Greek Islands in the Aegean Sea, he and his brother Oruc had established themselves as successful privateers against Christian targets by 1512, when Sultan Selim I came to power. Hayreddin had two memorable naval encounters with the Genoese Admiral Andrea Doria, and, although under somewhat unclear circumstances, Hayreddin bested the Italian both times. He died of natural causes in 1544 and was succeeded as Kapudan Pasha by Turgut Reis (Turgut Pasha). Piri Reis was a nephew. Barbarossa was also called as "Red Beard" and "Captain Hizir".

Originally, he and his brother joined forces successfully with Sultan Selim I (The Grim) in about 1515, but he really came to glory under Selim's son, Süleyman The Magnificent. Barbarossa was virtually unstoppable in the Mediterranean during his Ottoman lifetime; first as an ordinary Commander and then as Grand Admiral of the Fleet (Kapudan Pasha) between about 1515 to 1544. The following personal description of Barbarossa comes to us from Captain Muhlis Ergin of the Turkish Naval Museum (Ankara, December 1998).

Hayreddin was clever, and bright as a youngster though he had a tendency to mock his contemporaries. When he was a young man, he was noted for his impressive way of speaking, and he was brave but prudent, and a strong willed person. He was born with the fighting instinct and he had a bold manner. As an adult, he was a successful Mediterranean commander because of his cleverness and speed of comprehension. He took care to educate his subordinates, several of whom became admirals. He treated his colleagues nicely, politely, and thus was loved by them. In private affairs, he was cheerful, elegant, and a teller of jokes. Once, Hayreddin Pasha publicly complimented his subordinate Turgut; "Turgut is more advanced than I". With this he showed his humility and nobility. Physically, he was dark-skinned, of an average height, and had a massive bone and body structure. His hair, beard, eyebrows and eyelashes were luxuriant (some reports say he was red-haired), and his eyebrows touched each other. Turgut Reis' daughter was married to his son. According to this information we may assume that he was married, but there is no source indicating the factual details. He spoke all the main Mediterranean languages such as Greek, Arabic, Spanish, Italian and French. And he loved music.

Today his shrine is located at Besiktas district in Istanbul, which was built by architect Sinan in the 16th century.