Mustafa Kemal Atatürk (1881 - 1938) was the founder and the first President of the Republic of Turkey. Mustafa Kemal was born in 1881 in Salonika (Thessaloniki, today in Greece, then under the Ottoman rule). His father's name was Ali Riza Efendi. His father was customs official.

His mother's name was Zübeyde Hanim. For his primary education, he went to the school of Semsi Efendi in Salonika. But Mustafa lost his father at an early age, he had to leave school. Mustafa and his mother went to live with his uncle in the countryside. His mother brought him up. Life continued like this for a time. Mustafa worked on the farm but his mother began to worry about his lack of schooling. It was finally decided that he should live with his mother's sister in Salonika.

In 1906, he was sent to Damascus (Sam). Mustafa Kemal and his friends founded a society which they called "Vatan ve Hürriyet" (Fatherland and Freedom) in Damascus. On his own initiative, he went to Tripoli during the war with Italy in 1911 and took part in the defense of Derne and Tobruk. While he was still in Libya, the Balkan War broke out. He served in the Balkan War as a successful Commander (1912-1914). At the end of the Balkan War, Mustafa Kemal was appointed military attaché in Sofia. 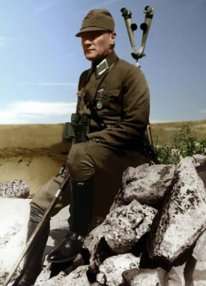 When Mustafa Kemal was in Sofia, the First World War broke out. He was made Commander of the Anafartalar Group on 8th of August, 1915. In the First World War he was in command of the Turkish forces at Anafartalar at a critical moment. This was when the Allied landings in the Dardanelles (today's Canakkale Strait) took place and he personally saved the situation in Gallipoli. During the battle, Mustafa Kemal was hit by shrapnel above the heart, but a watch in his breast pocket saved his life. Mustafa Kemal explained his state of mind as he accepted this great responsibility: "Indeed, it was not easy to shoulder such responsibility, but as I had decided not to live to see my country's destruction, I accepted it proudly". He then served in the Caucasus and in Syria and just before the armistice in 1918 he was placed in command of the Lightning Army group in Syria. After the armistice (peace agreement), he returned to Istanbul.

After the Armistice of Montreux, the countries that had signed the agreement did not consider it necessary to abide by its terms. Under various pretexts the navies and the armies of the Entente (France, Britain and Italy) were in Istanbul, while the province of Adana had been occupied by the French, and Urfa and Maras by the British. There were Italian soldiers in Antalya and Konya, and British soldiers in Merzifon and Samsun. There were foreign officers, officials and agents almost everywhere in the country.

On the 15th of May 1919 the Greek Army landed in Izmir with the agreement of the Entente. Under difficult conditions, Mustafa Kemal decided to go to Anatolia. On 16th of May 1919, he left Istanbul in a small boat called the "Bandirma". Mustafa Kemal was warned that his enemies had planned to sink his ship on the way out, but he was not afraid and on Monday19th May 1919, he arrived in Samsun and set foot on Anatolian soil. That date marks the beginning of the Turkish War of Independence. It is also the date that Mustafa Kemal later chose as his own birthday. A wave of national resistance arose in Anatolia. A movement had already begun in Erzurum in the east and Mustafa Kemal quickly placed himself at the head of the whole organization. The congresses in Erzurum and Sivas in the Summer of 1919 declared the national aims by a national pact.

When the foreign armies occupied Istanbul, on 23rd of April 1920 Mustafa Kemal opened the Turkish Grand National Assembly and hence established a provisional new government, the centre of which was to be Ankara. On the same day Mustafa Kemal was elected President of the Grand National Assembly. The Greeks, profiting by the rebellion of Cerkez Ethem and acting in collaboration with him, started to advance towards Bursa and Eskisehir. On the 10th of January 1921, the enemy forces were heavily defeated by the Commander of the Western Front, colonel Ismet and his troops. On the 10th of July 1921, the Greeks launched a frontal attack with five divisions on Sakarya. After the great battle of Sakarya, which continued without interruption from the 23rd of August to the 13th of September, the Greek Army was defeated and had to retreat. After the battle, the Grand National Assembly gave Mustafa Kemal the titles of Ghazi and Marshal. Mustafa Kemal decided to drive the enemies out of his country and he gave the order that the attack should be launched on the morning of the 26th of August 1922. The bulk of the enemy forces were surrounded and killed or captured on the 30th of August at Dumlupinar.

The enemy Commander-in-Chief, General Trikupis, was captured. Or the 9th of September 1922 the fleeing enemy forces were driven into the sea near Izmir. The Turkish forces, under the extraordinary military skills of Kemal Atatürk, fought a War of Independence against the occupying Allied powers and won victories on every front all over the country. 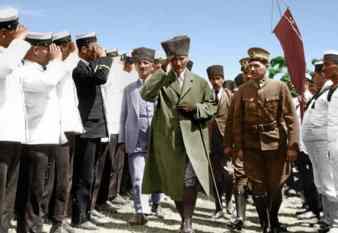 On the 24th of July 1923, with the signing of the Treaty of Lausanne, the independence of the new Turkish State was recognized by all countries. Mustafa Kemal built up a new, sturdy, vigorous state. On the 29th of October 1923, he declared the new Turkish Republic. Following the declaration of the Republic he started to his radical reforms to modernize the country. Mustafa Kemal was elected the first President of the Republic of Turkey.

Atatürk made frequent tours of the country. While visiting Gemlik and Bursa, Atatürk caught a chill. He returned to Istanbul to be treated and to rest, but, unfortunately Atatürk was seriously ill. He spent his last days of life on the presidential yacht named Savarona. At 9.05 AM on the 10th of November 1938, Atatürk died, but he attained immortality in the eyes of his people. Since the moment of his death, his beloved name and memory have been engraved on the hearts of his people. As a commander he had been the victorious of many battles, as a leader he had influenced the masses, as a statesman he had led a successful administration, and as a revolutionary he had striven to alter the social, cultural, economic, political and legal structure of society at its roots. He was one of the most eminent personalities in the history of the world, history will count him among the most glorious sons of the Turkish nation and one of the greatest leaders of mankind.

1893
Mustafa enters the Military Preparatory School in Salonika and is given the second name "Kemal" by his teacher.

1899
Mustafa Kemal enters the infantry class of the Military Academy in Istanbul.

1902
Mustafa Kemal graduates from the Military Academy and goes on to the General Staff College.

January 11, 1905
Mustafa Kemal graduates from the General Staff College with the rank of Staff Captain and is posted to the Fifth Army, based in Damascus.

October 1906
Mustafa Kemal and his friends from the secret society "Fatherland and Freedom" in Damascus.

April 25, 1915
Allies land at Ariburnu (Gallipoli) and Mustafa Kemal stops their progress with his division.

August 6-7, 1916
Mustafa Kemal takes Bitlis and Mus back from the enemy.

May 19, 1919
Mustafa Kemal lands in Samsun. This date was recorded as the start of War of Independence.

July 8, 1919
Mustafa Kemal resigns from the post of Inspector of 3rd Army and from the army.

December 27, 1919
Mustafa Kemal arrives in Ankara with the Executive Committee.

May 11, 1920
Mustafa Kemal is condemned to death by the government in Istanbul.

August 5, 1921
Mustafa Kemal appointed Commander-in-Chief of the Army by the Grand National Assembly.

August 23, 1921
The battle of Sakarya begins with Turkish troops led by Mustafa Kemal.

September 19, 1921
The Grand National Assembly gives Mustafa Kemal the rank of Marshal and the title Gazi.

August 26, 1922
Gazi Mustafa Kemal begins to lead the Great Offensive from the hill of Kocatepe.

October 29, 1923
Proclamation of the Turkish Republic and Gazi Mustafa Kemal is elected as the first President.

August 24, 1924
Gazi Mustafa Kemal wears a hat for the first time at Sarayburnu in Istanbul.