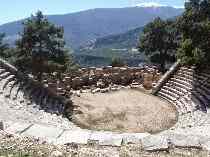 Arycanda is an ancient Lycian city located in the Mediterranean region of Turkey, on the west bound of Aykiricay river near Arif village between Elmali - Finike road, west of Antalya. The city was built on large terraces on the slopes of a mountain overlooking the valley. It's beleived that it has an Anatolian origin and its history dates back to the second millenium BC, but the oldest findings are from 6th and 5th centuries BC such as coins belonging to the period of Perikles, the king of Limyra. The city was ruled by Persians in the 5th century BC, then came under the domain of Alexander the Great, then by Ptolemaiosians of Egypt, then by Seleucids, and then ruled by Rhodes after the Apamea peace treaty.

Arycanda is one of the oldest sites in Lycia, it became a part of the Lycian League and minted its own coins in the 2nd century BC. The city became Roman in 43 AD when emperor Claudius ended the Lycian League. It was restored after the great earthquake in 240 AD where people lived until 9th century during the Byzantine era and then moved to another location next to Arif village.

Excavations led by Ankara University have started in 1971 and the archaeological site is being excavated and restored since then. In the Acropolis you can mainly see ruins from the Hellenistic and older periods; bouleterion, prytaneion, temple of Helios, upper agora, shops and houses. Meanwhile in the lower city there are mostly Roman ruins.

Next to the gymnasium there is the largest bath complex of Lycia which is located on the lowest terrace, there were several bath houses of all sizes in the city. The theater, which was built around 1st century BC or AD, has a typical Greek plan and is in very good condition with 20 rows of seats. The stadium is above the theater and is in the form of a small running track measuring 106 meters long and 17 meters wide (348 x 56 feet). The lower agora has many shops around surrounded by a portico on three sides, and has a small temple in the middle. The odeon is from the 2nd century AD and was richly decorated with colored marbles, with the bust of Emperor Hadrian in front of the facade. The bouleuterion had seats carved into the rock where the city council met. There are two necropolises with many monumental tombs and sarcophagi dating mostly from 2nd century AD and after. There are also ruins of cisterns and aquaduct.