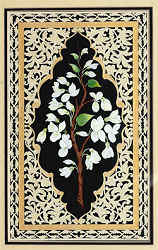 Kat'i is the art of stenciling intricate designs into leather or paper. The paper could be a simple one or an Ebru (marbling art) paper. A "nevregen", a small sharp knife was used to carve into the paper and the leather. The process of pasting was done with a mixture called "cirisli muhallebi" in Turkish. This was a mixture of milk, rice flour and book binder's paste. The surface on which the cut-outs were pasted was called "male". Those surfaces on which the cut-outs were directly carved were called "female". Besides simple shapes, complex paper cuts were produced that showed colorful flowers, flower gardens or a landscape, calligraphyc decorations and so on, giving way to three-dimensional images.

The origins of this art can be traced back to Iran. In the 15th century delicate and beautifully composed patterns in leather filigree and paper cut-out were practiced with great skills and patience. Ottoman artists, called as "Kati'an", have started used it from 16th century on in order to decorate the bindings of religious and philosophical texts. This art became very popular especially during the times of Suleyman the Magnificent. Kat'i was introduced to Europe around 17th century when western travelers took some examples with them on their journey back home. Unfortunately today there are very few Kat'i masters left; it's an art form which is dying.