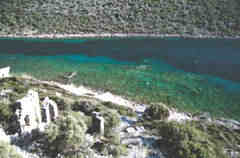 Aperlai is located on the Sicak peninsula, near the Sicak jetty. A Lycian city, Aperlai's history is known from silver coins bearing its name that have been discovered and goes back to the 4th or 5th centuries BC. Aperlai was the head of the Lycian Confederation, of which Isinda, Simena and Apollonia were also members. It's very difficult to get to the archaeological site from the land, it requires about 23 kilometers (14 miles) of trekking from Kas, therefore it's advisable to take a boat ride from Kas or Ucagiz (Kekova) ports.

The city walls begin at the seashore and are fortified with towers at intervals. These walls, with their rectangular and polygonal construction, are from Roman times. Other remains at Aperlai are all from the Byzantine and later periods. Inside the city walls there are ruins of a Christian church and a chapel, and a cistern. The western reaches of the wall are of rectangular construction. There are three gates in this wall, two of which have a plain and the third a blind archway. The southern reaches of the walls are of polygonal construction and in a bad state of repair. This side is reinforced with two towers and it is here that the main gate was located. Outside the walls there are typical Lycian sarcophagi with round lits all over the place, and a monumental tomb carved into the rocks. Some of the sarcophagi are in the water, suggesting us that the land was slided towards the sea during many earthquakes after all these centuries. There wasn't any theater at Aperlai.

Very few excavations have been made in Aperlai, there is still lots to discover. The site is covered with heavy bushes, making sometimes difficult to find a path. Near Aperlai, you can also visit the ancient site of Apollonia, another Lycian city on the Mediterrranean.