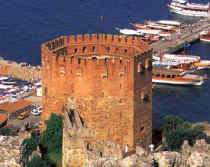 Alanya town is located about 100 kilometers (65 miles) to the east of Antalya, on a peninsula between the Mediterranean Sea in the south and the Taurus Mountains in the north. It's one of the most popular holiday destinations of Turkey today especially for Sun - Sea - Sand lovers. It has many beaches with a blue flag, awarded by a non profit organisation "Foundation for Environmental Education" (FEE), and many hotels and resorts along the coast on sandy beaches. Therefore, every year millions of tourists choose Alanya for their holidays. Most of the foreign visitors to the town are from Germany, Holland, Scandinavia, and Russia. Lately, many foreigners have bought (and continue to buy) property in and around Alanya for their holidays or for the retirement. It became a popular area especially for the German nationals.

Historicaly, the town stood between Cilicia and Pamphylia regions in the south. The first foundations are not quite known but during the excavations in several caves nearby, it's discovered that the area was inhabited since the Paleolitic ages. Around the 4th century BC, the city was known as Coracesium. The Seleucids tried to capture it but failed. Later on it became the center of piracy in the Mediterranean especially during the reign of the rebel Diodotus Tryphon. Roman general Pompey the Great captured the city in 65 BC, putting an end to the pirates' rule. During the Roman period, the city prospered and minted its own coins in the 2nd century AD, which was a sign of richness and prosperity at that time.

After the collapse of the Roman Empire, the Byzantines ruled the city. They called it as Kalonorosa, meaning "beautiful mountain". There aren't much details from the Byzantine period but it must have been a Christian city like the rest of Cilicia and Pamphylia. During the Medieval ages the city was know with different names; Candelor, Scandelore or Galenorum, named by the Genovese, Venetians, and the Cypriots.

Around 11th and 12th centuries the city changed hands between the Seljuk Turks, Byzantine ruler Alexios I Komnenos, First Crusade, and the Armenian ruler Kyr Vard. Finally, it was captured in 1221 by the Seljuk Sultan Alaeddin Keykubad I who gave his name to the city and called it as Alaiye. During this time, the town lived its hay-days again. Major construction and repair projects were carried out buy the sultans, making the city an important trade port for western Mediterranean.

After the fall of Seljuks, the city was captured by Karamanlids and other Anatolian principalities, as well as by Lusignan kings from Cyprus and then Egyptians. During the Ottoman rule after 15th century, the city lost its importance. It's said that Atatürk called the town as Alanya instead of Alaiye in 1933, so that became the modern name of the city.

Alanya is one of the best preserved Seljuk cities today. It has many ancient sites, monuments, and caves, as well as natural beauties.

The fortress is built on a hilltop and surrounded by a 6,5 kilometers (4 miles) long wall, equipped with 140 towers and about 400 cisterns. In the highest section, which is the western part of the hill, the fortress reaches at 250 meters (820 feet) above sea level. Eastern section of its wall is going down the hill all the way to the sea, until it reaches the Red Tower. The castle as we see it today was built in the 13th century by the Seljuk sultan Alaeddin Keykubad, but its foundations are dating back to the Hellenistic period. There were arched main gates with inscriptions on them and some smaller auxiliary gates, but many of them are damaged today. There are several old buildings inside the castle, such as brick cisterns, baths, and Byzantine churches. There is also a settlement inside. The road to the castle is open to traffic but very narrow, alternatively you can also walk to the top in about 1 hour. There are restaurants and cafeterias on the road along the sea side.

The tower is one of the most prominent Seljuk monuments in Alanya. Located at the harbor, this 33 meters (108 feet) tall tower was built in the 13th century for the surveillance of the seaport and the dockyard. It became the symbol of Alanya today with its octagonal shape. There is a cistern in the middle of the tower, and you can reach to the top by big stone steps. Its name comes from the red bricks used in the costruction of its top, meanwhile the lower part was built with local stone. There are five floors in the tower, where the lowest floor is used for exhibitions.

Another fine example of the Seljuk period, the shipyard was again built by the Seljuk ruler Alaaddin Keykubat in the 13th century and located in the south of the Red Tower. The structure, measuring 56 x 44 meters (183 x 144 feet), has five arched and inter-connected galleries by the sea where big warships of the time were built. The shipyard also contains offices and a small mosque located on the left of the entrance. You can reach there with small boats from the sea, the entrance is free of charge. Today, the building is illuminated at night. There's also a gun house next to the shipyard standing on a rock, where cannons for battleships were made.

The cave was discovered by accident in 1948 during the works for the construction of Alanya Harbor, and soon this natural beauty became one of the most popular attractions in the area because it's beleived that the air in the cave is beneficial to asthmatics. Thousands of years old stalagmites and stalactites attracts many visitors to the cave. The cave has a constant temperature of 22 degrees Celsius (around 72 Fahrenheit) and more than 90% of humidity. Damlatas Cave is about 30 meters (100 feet) deep and about 15 meters (50 feet) high. Other caves near Alanya are; Dim cave, Hasbahce cave, and Sea caves.